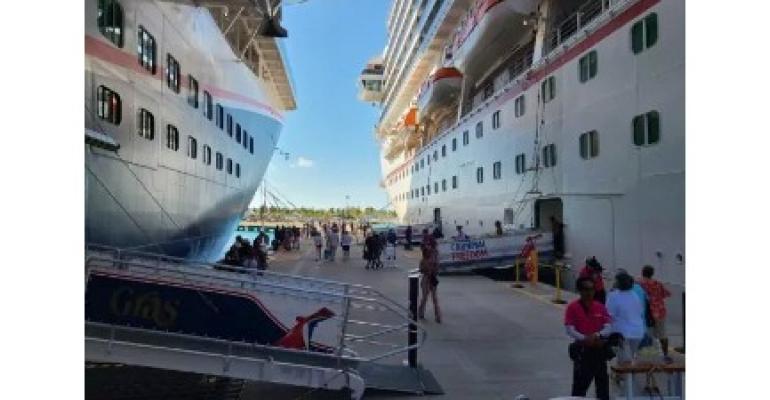 Carnival Freedom, right, alongside at Grand Turk Thursday. Mardi Gras is docked across the pier

May 27 update: In addition to May 28, the June 2 and June 6 departures of Carnival Freedom from Port Canaveral have been canceled.

Carnival Cruise Line will deadhead a ship to Grand Turk to pick up passengers from Carnival Freedom after a fire in the funnel that requires repairs.

The blaze was quickly extinguished Thursday morning by the ship's emergency response team, and there were no injuries, but Carnival Freedom will be going to Grand Bahama Shipyard in Freeport for work.

Carnival canceled the May 27 cruise of Miami-based Carnival Conquest and will send that ship to Grand Turk. It is due to arrive Saturday to pick up the Carnival Freedom passengers and take them to back to Port Canaveral, arriving Monday. Freedom had embarked at Canaveral May 23 for what was scheduled as a five-day cruise.

Next Conquest cruise cut short by a day

Carnival Conquest will then return to Miami, with its May 30 departure shortened by a day and now to embark on May 31.

Carnival Freedom's May 28 departure from Port Canaveral is canceled.

Meanwhile, Carnival said everyone onboard is safe, and hotel and guest services, along with safety equipment, are fully functioning.

The fire broke out in the funnel while Carnival Freedom was alongside at Grand Turk, and most passengers were ashore. The blaze sent flames and billowing black smoke from one of the funnel's wings, and bits of flaming debris fell, one piece landing on a lifeboat.

Carnival's Mardi Gras was docked on the other side of the pier.