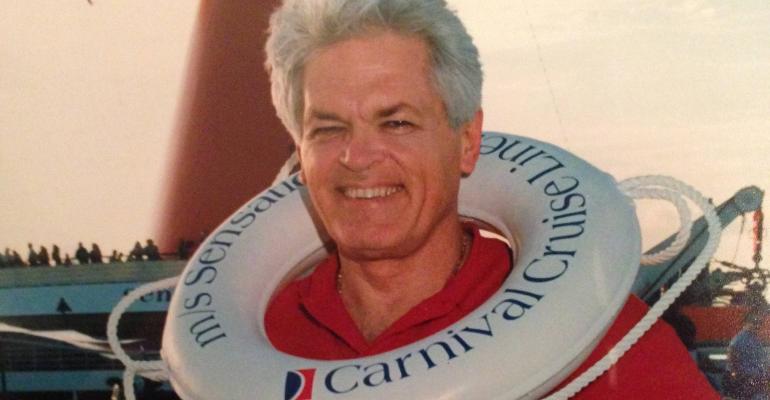 Mr. Phillips was responsible for many of the fun hallmarks of Carnival's service and a mentor to many
Everette Phillips, who led Carnival Cruise Line's food and beverage operations over two decades, setting their fun style and becoming a beloved mentor to many, died April 21.

Phillips died at his home in Boca Raton, Florida, after a long battle with non-Hodgkin lymphoma. He was 86.

Called respectfully by all 'Mr. Phillips,' he created and led Seachest, the entity that provided F&B, photo, gift shops and bon voyage services (including weddings) for the Fun Ships.

'Mr. Phillips was a huge influence in my early days at Carnival and had an enormous impact on the company’s growth and success over the years. He stressed quality, consistency and fiscal discipline amongst other things that live on to this day,' said Cyrus Marfatia, VP culinary and dining for Carnival. 'Above all, he was a very kind and caring person. He was a true mentor and friend who molded me into what I am today ... He will never be forgotten.'

'Everette Phillips was the first icon of the cruise industry I met, when he said I was too young to work on board the MS Boheme,' recounted Carnival veteran operations executive Roger Blum who, as a boy, regularly rode his bike to PortMiami trying to get a cruise ship job. A few years later, when Phillips joined Carnival, 'he became a true mentor and friend,' Blum continued.

'When Carnival started to design and build their own vessels, Mr. Phillips was the visionary behind many of the amenities that became industry standards. But, for me, his true legacy is his warm, direct management style that was behind the friendly atmosphere on Carnival Cruise Line vessels.'

Victoriano Bernardez, a longtime F&B employee, was 19 when he met Phillips. 'He put his trust in me. I placed my total faith in him,' Bernardez said. 'I have never known a man with such a gentle nature who was able to lead so many. His examples will forever be a part of Carnival Cruise Line.'

Putting fun into the dining

According to Carnival brand ambassador and senior cruise director John Heald, Phillips started the dancing in the dining rooms (with 'Hot, Hot, Hot,' still popular today), the parades, 'the smiles and the fun that is one of our greatest traditions.' He never forgot a name and always thanked every crew member he met.

'He was the kind of guy who brought authority to the job with a soft touch,' added Carnival veteran sales executive Maurice Zarmati. 'He was a gentleman. He had an inquisitive mind and a very fair approach. When he spoke to you, he looked you in the eye. He was never distracted. He always made you feel comfortable.'

Zarmati noted how Phillips traveled far and wide to recruit the talent who have been so key to Carnival, people like Marfatia and the late Natko Nincevic, who succeeded Phillips.

'He was very good at what he did, excellent,' Zarmati said. 'He was a special human being and everybody loved him. Everybody.'

In the 1960s, Phillips had established a reputation as a successful shoreside restaurant manager whose Morrison's Cafeterias were popular and profitable. Eastern Steamship Lines tapped Morrison's to provide catering and Blum recalled Phillips talking about being aboard Bahama Star when it rescued people from the burning Yarmouth Castle.

After Eastern, Phillips launched his own home delivery catering business and owned a couple downtown Miami restaurants. He then worked as general manager for Commodore Cruise Lines before being recruited to Chandris as F&B manager in 1976. He spent two years on Victoria and Britanis in Europe.

Legendary operations chief Meshulam Zonis had given Phillips a standing offer to join Carnival, and with a young family in Florida, Phillips decided it was time for a stateside job in 1978.

According to Phillips' daughter Donna, Carnival didn't have the best reputation for its food or its speed in paying vendors. So when Phillips interviewed with Ted Arison, he asked to run F&B autonomously. That's how Seachest was born.

'Ted gave him $50,000 and said don't come back for more,' Donna recounted. 'In 1978/79 that was a lot of money, but he had to buy all the food, and beverages for the bars and supplies for the photo shop. He ran it as his own company. The first month, he lost money. The second he broke even. The third he made a profit and he never looked back.'

Phillips created a successful model for operations that served Carnival well until his retirement in 1997.

He also came up with innovations such as facilitating bon voyage gifts, a new revenue stream. And when architect Joe Farcus designed a two-story restaurant, Phillips balked because he didn't want his waiters carrying heavy trays up and down steps. The solution: galley escalators. In the laundry, he crafted carts with smooth frames so the fabrics wouldn't snag.

As children, Donna and her brother complained about having to change out of their swimsuits for lunch in the dining room, and she recalled the day her father delightedly showed off a new ship's aft deck cafeteria with stations for pizza, burgers and other foods. A mini galley supported the operation. Voila! Lido Cafe dining was born.

Proudest of his people

What her father was proudest of, though, were his people. 'All I heard the whole time when I went on a ship with him was "Mr. Phillips! Mr. Phillips!" — people wanting to talk with him and everyone saying how kind he was and how fair.'

Phillips was born in High Springs, Florida, to a family of modest means. He got a Rotary Foundation scholarship to study at the University of Florida and began in music — he was a talented pianist and organist. After working as a waiter, he switched majors and earned a business degree in 1959, going on to the Morrison's Cafeterias job.

In recent years, even while battling cancer, Phillips traveled the world, often by ship. He climbed Machu Picchu, visited the Amazon and Easter Island, sailed the Danube and trekked on Alaskan glaciers. He pedaled the SkyRide on Carnival Vista.

Phillips had been looking forward to a Seabourn Sojourn world cruise this past January that he had to cancel for chemotherapy.

'I called him a tank,' Donna said. 'It was incredible how he pushed through.'

Besides Donna, Phillips is survived by a sister, Louise Mason, and nephews Robert Perry and Ronald Perry. He was preceded in death by his first wife Doyce, his second wife Diane and his son Mark. Diane had run the gift shops on the Carnival ships.

Services are planned for Nov. 21, around the time of Everette and Diane's wedding anniversary, at The Gardens of Boca Raton and are expected to be live-streamed.