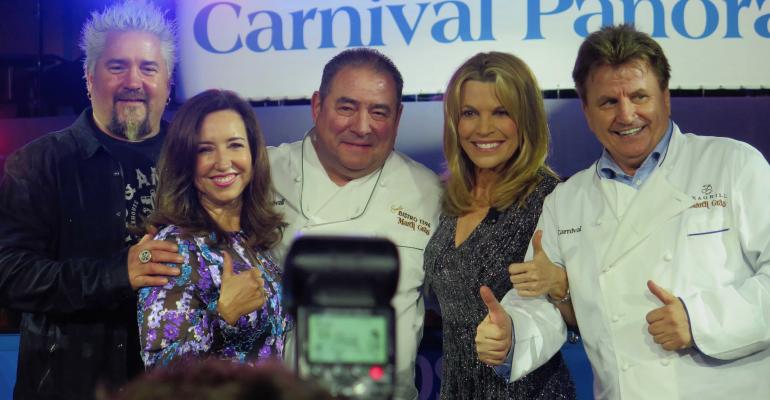 Fittingly, the longtime ‘Wheel of Fortune’ hostess first turned over letters spelling out P-A-N-O-R-A-M-A before a giant bottle of Champage smashed against the bow.

The letters were on the back of big ‘Feast of Fun’ plates held by a row of the ship's chefs.

Continuing the food theme, celebrated chefs on hand included Guy Fieri, whose long partnership with Carnival is embodied in his Guy's Pig & Anhor Smokehouse Brewhouse and Guy’s Burgers on board. Emeril Lagasse will have his first seagoing venue, Emeril’s Bistro 1396, aboard the nest Fun Ship, 2020’s Mardi Gras, as will master chef Rudi Sodamin with Rudi’s Seagrill, where a selection of dishes will be presented as edible food faces.

Carnival Panorama, meanwhile, has the first Carnival Kitchen, a culinary studio for engaging, hands-on classes, which Fieri, Lagasse and Sodamin inaugurated earlier at a ribbon-cutting.

Queirolo called bringing out Carnival Panorama ‘the proudest moment in my 40 years at sea.’

Kicking off the naming celebration, held outdoors on the ship’s Lido Deck, the University of Southern California Trojan Marching Band paraded in to cheers, followed by the celebrity chefs and Carnival Corp. & plc Chairman Micky Arison and wife Madeleine, CEO Arnold Donald and Carnival Cruise Line senior leadership. Sister brand Princess Cruises President Jan Swartz was there, too, fresh from the naming ceremony for Sky Princess a few days ago.

Above it all floated the Carnival AirShip, emblazoned with its #ChooseFun message.