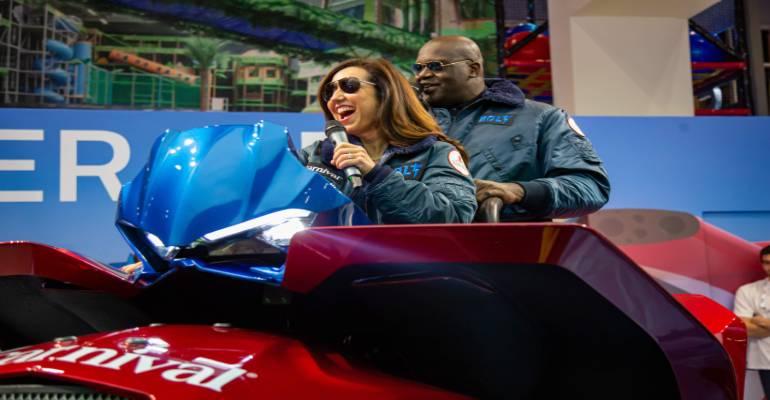 Christine Duffy and Chief Fun Officer Shaquille O'Neal go for a 'spin' in a BOLT vehicle at IAAPA
Carnival Cruise Line shared more details about BOLT, the first roller coaster at sea, to debut on Mardi Gras in August.

BOLT will form the centerpiece of an expansive open-air recreation area atop the ship.

Carnival President Christine Duffy and Shaquille O’Neal, the line’s chief fun officer, showed off an all-electric, motorcycle-inspired BOLT vehicle adorned with metallic red and blue stripes and an eye-catching yellow lightning bolt. Each vehicle will feature a digital speedometer display and speakers with new sound effects that will activate to enhance the thrills.

Duffy and Shaq made their appearance at the annual International Association of Amusement Parks and Attractions (IAAPA) Conference in Orlando.

Carnival partnered with Munich-based Maurer Rides to showcase BOLT at IAAPA, which brings together innovators from the world’s largest theme parks and attractions.

Aboard Mardi Gras, cameras will be located along BOLT’s 800-foot track and within the vehicle itself, providing riders with photo keepsakes as they take in 360-degree views and race 187 feet above the sea with drops, dips and hairpin turns achieving speeds of up to 40 miles per hour. Riders choose their own speed.

‘Whether guests want to get an adrenaline rush or take it slow and enjoy the breathtaking views, BOLT will have it all,’ Duffy said.

BOLT will take center stage in the Ultimate Playground, one of Mardi Gras’ six themed zones, spanning Decks 18-20 and home to the largest WaterWorks park in the Carnival fleet featuring three heart-racing slides.

Blue Lightning will offer 312 feet of high-speed twists and turns, while the 229-foot-long Orange Thunder drop-down slide will propel riders into a splash zone. Back by popular demand, Carnival’s signature Twister slide encompasses 265 feet of thrills. Other features include a splash zone for kids with a 150-gallon PowerDrencher tipping bucket and numerous water toys.

The expanded SportSquare recreation complex features a 600-foot-long suspended ropes course — the longest in the fleet — a nine-hole miniature golf course, a jogging track and outdoor fitness equipment, and a basketball court.