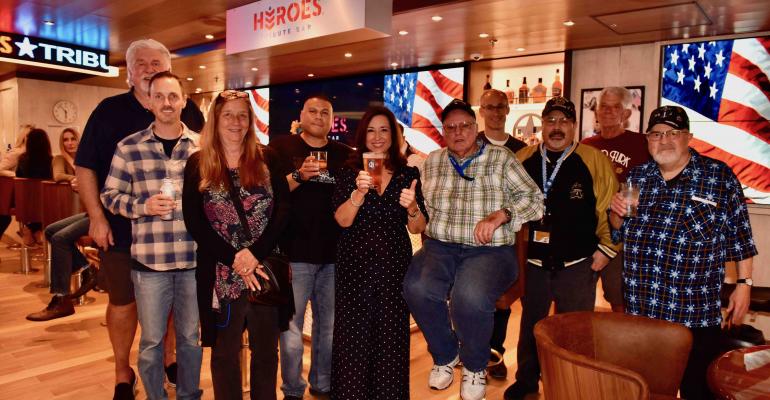 Instead of sports memorabilia, why not deck the bar in military regalia as a salute to veterans? Duffy challenged her team and 39 days later as Panorama debuted in Long Beach, California, the Heroes Tribute Bar was shipshape.

Carnival carries more active and retired military personnel than any other cruise line and has a years-long relationship with the nonprofit Operation Homefront, so the bar’s new theme fits neatly with the Fun Ship brand.

‘The Heroes Tribute Bar is a project that is very near and dear to my heart and one that everyone at Carnival is extremely proud of. We’re always looking for new ways to honor our military heroes,' Duffy said. She added the new outlet is a tribute to the sacrifices of armed services personnel and their families, and complements the extremely popular military tributes held on every Carnival sailing.

As Carnival Panorama cast off from Long Beach Wednesday evening on its inaugural cruise, Duffy was joined by military personnel and veterans in the bar for a grand opening celebration and toast.

She announced a portion of the proceeds from specialty cocktails served in a custom pint glass will benefit Operation Homefront. The creatively named drinks range from 'Green Beret' and 'Blue Angel' to 'Shore Leave' and 'At Ease,' among others.

The bar's all-American décor includes logos of the five branches of the US military, uniforms, photos and messages centering on three themes: ‘Welcome Home,’ ‘Thank You for Your Service’ and ‘America’s Heroes.’