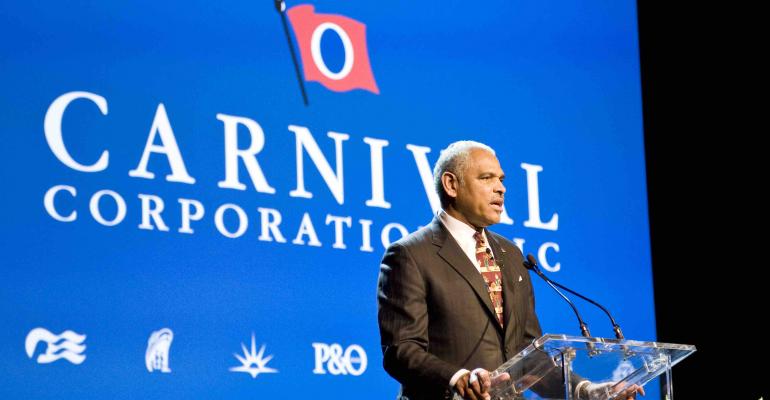 Despite negative headwinds, 'our brands continue to perform and we are at record booked occupancy levels for 2020 on peak capacity growth,’ CEO Arnold Donald said
Carnival Corp. & plc overcame a ‘plethora of negative events’ in 2019 to post a higher than expected fourth quarter profit and 2020 outlook.

Shares shot up more than 7.5% in Friday morning trading.

Carnival is entering 2020 with a record booked occupancy position. At this time, cumulative advanced bookings for the full year are slightly ahead of the prior year at slightly lower prices.

Booking volumes at the beginning of Q4 were impacted by Hurricane Dorian. During the last eight weeks, booking volumes have been running higher with prices that are in line with 2019.

The company expects full year net cruise costs in constant currency, excluding fuel per available lower berth day, to be in line with 2019.

Carnival will increase MGO as a percent of total fuel consumption in 2020 due to the new global sulfur cap. MGO is currently anticipated to represent 40% to 45% of fuel consumed in 2020 compared to 21% in 2019. HFO use is expected to be 50% to 55% and all other fuel types approximately 5%.

Changes in fuel mix, fuel prices and currency exchange rates are forecast to increase earnings by 17 cents to 24 cents per share compared to 2019. 2020 earnings also figure in 12 cents to 17 cents per share incremental impact from prior year events and previously announced voyage disruptions, including ship delivery delays.

First quarter adjusted EPS is forecast in the range of 47 cents to 51 cents, compared to Wall Street’s 40-cent consensus and the 49 cents in Q1 2019.

‘Despite the negative impacts from the tail effect of the high number of unusual events in 2019, as well as a continuation of the negative headwinds facing our continental European source markets, our brands continue to perform and we are at record booked occupancy levels for 2020 on peak capacity growth,’ Donald said.

The company is currently talking with shipyards about slowing the pace of deliveries, without any specific timeframe mentioned. CFO David Bernstein told analysts Carnival could have more information by the end of January.

‘Given the evolution of conditions in continental Europe and recognizing the timing of significant capacity increases we have in our European portfolio, we are taking a number of actions to adapt over time,’ Donald continued. ‘Globally, we are also taking actions to further stimulate demand and increase our cost efficiencies in 2020 and beyond.’

Carnival achieved $125m in cost savings during 2019 thanks to its global sourcing initiatives, which continue.

In Germany, the company carries more than half of all cruisers, and AIDA outperformed last year, despite weaker consumer sentiment and a 20% capacity spike.

In Southern Europe, Carnival had 13% capacity growth in a difficult economic environment. Costa Cruises reduced its long-haul, exotic itineraries to cut out the extra air costs for consumers and is rightsizing its fleet by removing two older ships. That capacity decline is partially offset by Costa Smeralda, the brand’s first new ship for the European market in five years.

Donald said UK demand has held up despite Brexit, and P&O Cruises’ Iona, coming in 2020, is experiencing strong demand as the company's first newbuild for the UK market in years.

The Caribbean is performing well, with strong occupany and yield growth, which would have been even better if not for the Cuba disruption. Bernstein singled out the Caribbean as the ‘big driver' of higher sales volumes over the past eight weeks.

Alaska has been challenging for Carnival due to industry capacity growth there, but Donald said yields remain high and several marketing initiatives are in place to boost wave-season demand. Industry capacity ballooned 15% in 2019, 8% for the Carnival group. Carnival has 9% more capacity there in 2020.

‘Alaska’s a great market,' Donald said. 'We make really good money there. We’re doing everything over time to grow yield there.'