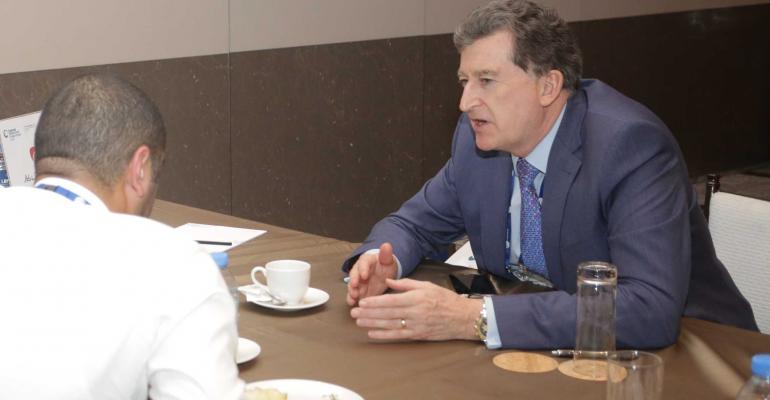 Young, pictured here at a Seatrade Cruise event in Dubai, has been a key public face of Carnival UK at cruise industry gatherings around the world
Steven Young, vp port & land operations for Carnival UK brands P&O Cruises and Cunard, is retiring at the end of this month.

He has been with Carnival UK since 2011 providing strategic leadership for the planning and operational delivery of port calls for the P&O and Cunard fleets worldwide.

Being responsible for itinerary planning and port ops, passenger embark/debark, ground handling and air logistic operations for a fleet of eleven cruise ships making 2,200 port calls per year, Young is well travelled and has been one of the key public faces of Carnival UK at cruise industry gatherings and Seatrade events around the world in the last nine years.

Poacher turned game keeper, Young started his landside career in the ports sector holding positions in both Australia and the UK.

Between 2009 and 2010 he was executive gm & harbour master with Sydney Ports Corporation.

Prior to that he worked for Associated British Ports for ten years including posts as deputy port director at the Port of Southampton between 2006 and 09 and the port’s harbour master from 2004 to 2006.

Both sides of the table

‘Having shared my career  pretty evenly between both the ports and the cruise sector and sat on “both sides of the table”, I have a perspective from each,’ Young told Seatrade.

‘This has certainly helped give me empathy and insight during the latter. They both have direct connection to the sea which is my first love, they both provided great variety and challenge, but by far the most enjoyable aspect, has been the camaraderie and friendship of the people who make up the international cruise community and this is what I will miss the most,’ he remarked.

Young started his engagement with the maritime sector serving as a master mariner with experiences at seas as a deck officer with P&O/Princess Cruises.

‘Since serving on ships such as P&O's Canberra and the Princess 'Love Boats' that gave me indelible memories, I would say the biggest change has been how cruising has evolved to appeal to all tastes and demographics. This through the sheer innovation and amenities that go into the modern cruise ship design and the seamless efficiency of how service is delivered to guests despite the significant logistical challenges. This never ceases to amaze me,’ Young shared.

With a lifelong interest in sailing having bare boat chartered in the Caribbean and Mediterranean on multiple occasions Young holds an RYA Yachtmaster Offshore certificate and he would definitely recommend a life in the cruise industry ashore for any cadet currently serving.

‘I firmly believe the industry will return stronger and wiser from its current adversity and my advice to any cadet currently serving, is to stay with it and get fully qualified.

‘If being at sea doesn't remain a lifelong calling, then take your skills ashore and you will find fabulous opportunities within the cruise industry to help shape and take it forward to an even more sustainable and exciting future,’ he advised.

‘There can be no greater satisfaction than being part of an  organisation that aims to make people “happy” and give them unrivalled experiences and memories,’ Young concluded.

Young told Seatrade he is planning on keeping a close eye on the industry going forward and will be looking at consultancy opportunities.