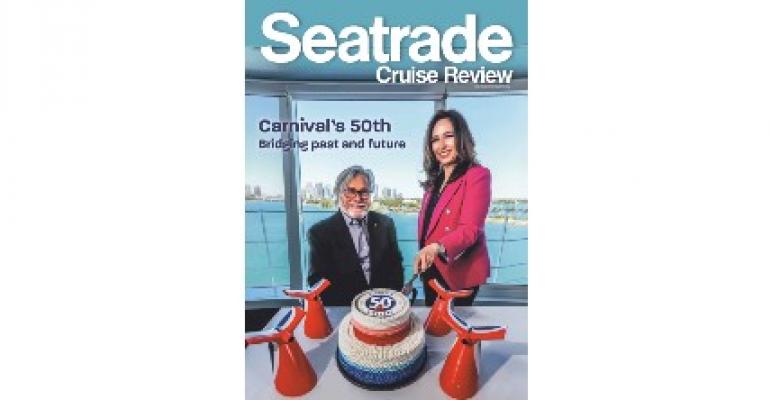 Micky Arison looks back at Carnival Cruise Line's founding and development in the brand's 50th year, with President Christine Duffy bridging to the future in Seatrade Cruise Review's latest issue.

Just out, the magazine is the official publication of Seatrade Cruise Global this week at the Miami Beach Convention Center.

In the cover story, Arison recaps some highlights (and lowlights) of Carnival's path to becoming cruising's most popular brand and the foundaton for global powerhouse Carnival Corp. & plc, while Duffy relates that Ted Arison's vision of making cruising accessible and affordable to everyone has never been more relevant.

It's a pivotal year for Alaska with both Seattle and Vancouver, BC forecasting a higher number of calls than in pre-pandemic 2019 and Canada opening, at last, to cruise ships. Look for stories on this plus an outlook for Central America with some key cruise infrastructure developments. There's a report on US domestic cruising and a preview of Margaritville at Sea.

Europe is covered comprehensively with a market report on Greece, a look at ports and destinations in the Mediterranean and Baltic, and a focus on Italy's shipyards and suppliers. MedCruise President Figen Ayan shares her vision for the association with Seatrade's Holly Payne, and Seatrade's Mary Bond talks to new Cruise Britain Chair Kate O'Hara.