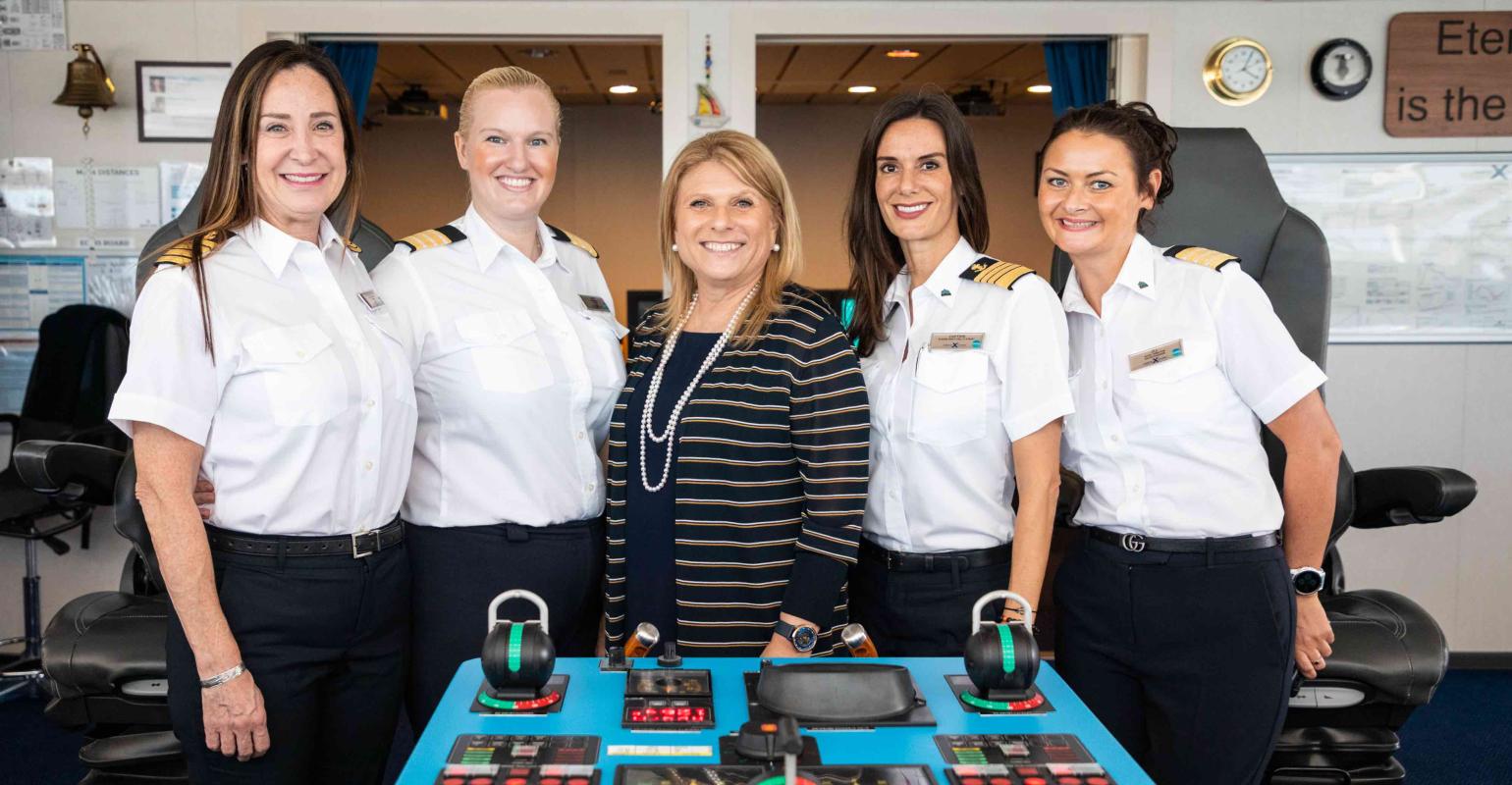 Celebrity CEO Lisa Lutoff-Perlo, center, with some of the line's women officers, including Capt. Kate McCue, second from right
Continuing its efforts to close the gender gap at sea, Celebrity Cruises plans a historic sailing for International Women’s Day on March 8. Commanded by Capt. Kate McCue, Celebrity Edge will carry an unprecedented all-female bridge team and women officers across many areas.

The 27 women in stripes come from 17 countries and span jobs from captain, staff captain and chief officer to hotel director, cruise director and third engineer.

‘We are all passionate about closing the gender gap,’ Celebrity President and CEO Lisa Lutoff-Perlo said. ‘Over the last few years, we have worked hard to diversify the crew on board and bring more women than ever into our industry.’ Today 22% of the company’s bridge teams are women.

Celebrity always celebrates International Women’s Day across its fleet and in 2020 is going all out with this first in history cruise.

‘We have enough women in every department across our fleet that we thought so why limit it to the bridge?’ Lutoff-Perlo said. ‘We had this idea, and one week later it was done. I was astonished. It wasn’t difficult at all.’

McCue, the first female American captain, has made big waves since her appointment several years ago. Her high profile in the news media and on social media shines a light on opportunities for women at sea. ‘Not only is word out but Celebrity is setting the standard and hoping other companies get on board,’ McCue said.

She credits Lutoff-Perlo’s leadership, and they both cited the shared vision of men leaders like Patrik Dahlgren, SVP global marine operations for Royal Caribbean Cruises Ltd., who has spearheaded Celebrity’s bridge diversification, and Brian Abel, SVP hotel operations for Celebrity.

‘Since 2015, we have raised the percentage of qualified women on our navigational bridges from 3% to 22%. Now, we hope this all-time industry high will continue to grow; we just need more women to raise their hands for careers at sea, especially in engineering,’ Lutoff-Perlo said.

‘We are fortunate to have many incredible, experienced and beyond-qualified women who have worked tirelessly to achieve these positions. And we also celebrate the many men who continue to support them and help champion having more women crew on board.’

Recruiting is one thing, and another is creating a culture that is nurturing and motivating so people want to stay, she added.

The maritime industry is very traditional. On the Celebrity fleet with its 70 nationalities, everyone is a minority of some sort, McCue noted. In her view, having diversity of gender or cultural background in maritime jobs unleashes ‘exponential creativity and brings a really interesting environment.’

High crew satisfaction scores and high guest net promoter scores since Celebrity brought more women onto the bridge and into other roles demonstrates this initiative is positive for the overall atmosphere on board and very well-received.

McCue said she feels ‘overwhelming’ acceptance in her job and is often stopped by men asking to take a picture for their daughters or granddaughters.

Lutoff-Perlo, who will be aboard for the one-of-a-kind March 8 cruise, hopes it attracts many families who bring their daughters for what will be a historic event.

‘The message we want to send is about diversity, balance and women getting an opportunity regardless of the sector they’re in. We’re in this in a way that’s important and meaningful in an industry where it’s difficult to recruit women.’

When Lutoff-Perlo speaks at maritime academies, there are less than 20% women, and sometimes less than 10%. In engineering schools, it’s even lower.

Opportunity for an amazing career

‘We want young women to know these are amazing careers,’ she said. ‘We want them to raise their hand for an opportunity. We’re providing it. It’s an exciting career and a company and a brand that welcomes women.’

For the March 8 sailing from Fort Lauderdale, Celebrity is curating special programming including evening gallery exhibitions and art auctions featuring female artists and collaborating on an exclusive design with luxury jewelry designer Reout Kallati. A cinema series will feature iconic women directors, lead actors and inspirational narratives. Other programming will include Women of the World-themed trivia challenges, Fearless Female Officers vs. Guests Pool Volleyball tournament and a Q&A panel with the ship’s female leadership team.

Additional programming is to be announced, including a moderated discussion panel with current confirmed special guests including artist and child prodigy Autumn de Forest and fashion designer Mary Frances. There will be networking opportunities and more, all with the goal of inspiring a new generation of young girls and women to continue pushing boundaries and breaking barriers.

Earlier this year Anne Kalosh wrote a cover story for Seatrade Cruise Review March issue on women seafarers. Some interviews conducted from the women working in cruise ship deck and technical roles can be downloaded here.