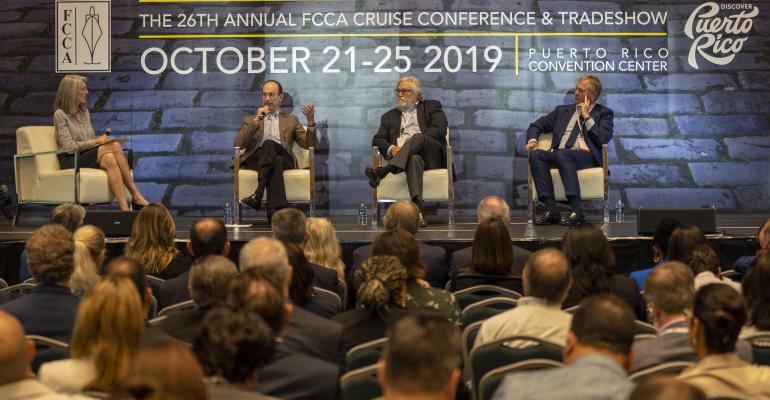 ‘It’s thriving,’ and the outlook for the region is ‘robust,’ Royal Caribbean Cruises Ltd. Vice Chairman Adam Goldstein said. Since geopolitical issues in Europe are having some impact, the Caribbean is ‘in a position of strength.’

‘Of all the economies we’re dealing with, the US economy is the strongest. So that’s reflected in the business,’ added Micky Arison, chairman, Carnival Corp. & plc.

Pierfrancesco Vago, executive chairman, MSC Cruises, agreed the US market is strong while Europe is ‘a little more complex.’ MSC is staking out more US business by deploying four ships from Miami this winter but also operates ‘very successful’ fly-cruises for Europeans to ships homeporting in the Caribbean.

‘Europeans love the Caribbean. It’s safe,’ Vago said, and ‘the Caribbean brand is strong for holidays.’

The issue creating ‘noise’ in the Caribbean this year was the abrupt end to Cuba cruises, Arison said.

‘Significant’ numbers of people canceled and, while all the public companies estimated the financial impact, ‘My guess is we underestimated because of the ripple effects,’ he added. ‘I’m not sure we will ever know what all of those were.’

Should the United States’ Cuba policy change, lines would love to go back.

‘There’s a lot of support in Washington to open up Cuba again,’ Arison told the FCCA audience. ‘I struggle to understand the decision made by the administration. Basically, they went back to a 50-year-old policy that didn’t work for 50 years, and I don’t see how it’s going to work now.’

The Carnival chairman believes there’s enough backing in Washington so if the administration changes, either in 2020 or four years later, that ‘we’ll have another opportunity.’

‘Our experience of Cuba cruises was remarkably positive,’ Goldstein agreed. ‘Guests loved going there and the ships succeeded in delivering the experience.’

Vago thinks MSC Cruises may have been impacted more than any other operator since it homeported in Havana, along with sailing from the US. He welcomed a possible US policy reversal as ‘great for everyone in the cruise industry,’ while a Havana homeport would help Eastern Caribbean destinations grow.

China’s potential remains though it’s a complicated market, given cabotage and geopolitical issues that limit itineraries, Vago said. He added it’s the dream of every middle-class Chinese to make a grand tour of Europe for the culture and shopping.

Carnival is ‘totally committed to the market,’ Arison said. Its new Costa Venezia is doing well there, with Costa Firenze to come. Carnival’s first newbuild in its joint venture with CSSC is due in 2023, ‘and we plan to continue growing in a measured way.’

Goldstein pointed out that all of cruising’s theaters globally are successful. With 30m people a year now cruising and the number of ships on order, ‘We need 45 million people cruising by the end of the next decade.’

For the Caribbean to keep its share, staying competitive is key. And now lines are showing a greater willingness to commit resources ‘at levels beyond whatever we did before.’

It’s essential the ‘destinations we visit come along for this ride of prosperity with us,’ Goldstein continued. ‘The economic benefit we bring is crucial. It doesn’t cause anyone to owe us. It sets the context for dialogue,’ he told an FCCA audience that included Caribbean and Latin American heads of state, ministers and governors.

While cruise line private destinations are getting a lot of attention, Arison said Carnival has invested ‘as much or more’ in non-private places like Roatán’s Mahogany Bay, Grand Turk and the Dominican Republic’s Amber Cove, with a Grand Bahama development in the works.

In just two months since Hurricane Dorian raked parts of the Bahamas, cruise lines are accelerating investment plans there, which should help recovery.

For Carnival, projects that SVP Giora Israel has worked on for years will ‘hopefully be expedited through the bureaucracy of permitting,’ Arison said, since these will create ‘a lot of jobs.’

Reflecting on the Dorian response, the cruise leaders talked about what they learned from past hurricanes that help lines act faster and more effectively. For Carnival, identifying the most nimble partners on the ground has been key.

Vago, who called the situation in Great Abaco ‘shocking, like an atomic bomb went off,’ proposed developing MSC’s cargo port in Freeport as a regional hub for the industry to respond to future storms.

Like Carnival and Royal Caribbean, MSC is pouring money into destinations. It is going to finance, build and operate a two-berth terminal at PortMiami, and in just a couple weeks will open its Ocean Cay MSC Marine Reserve in the Bahamas.

Starting with a blank slate at Ocean Cay, the company saw an opportunity to do something different and is transforming this industrial sand extraction site into a nature reserve.

Coral restoration is a focus. By restoring the reef, sea life, conch and fish will repopulate, and local fishermen will be able to sell their catch to MSC for use on Ocean Cay, creating a ‘circular economy.’

Given the island’s proximity to Miami, ships can stay until midnight or later and still be back at their homeport by morning. Simple stargazing will be a big attraction, especially, Vago said, for Europeans like himself who aren’t used to seeing the night sky due to light pollution.

‘Destinations are still the biggest driver of this industry,’ Vago told the FCCA audience, and while cruise lines compete, they ‘cooperate a lot all over the world — in the Caribbean, Europe, everywhere.’ This helps the industry flourish, he said.

Arison noted Carnival partners with other lines in more than half a dozen ports in Italy, and just teamed with Royal Caribbean for a St. Lucia development. ‘Very often it doesn’t make sense to do it alone but together it makes sense,’ he said.