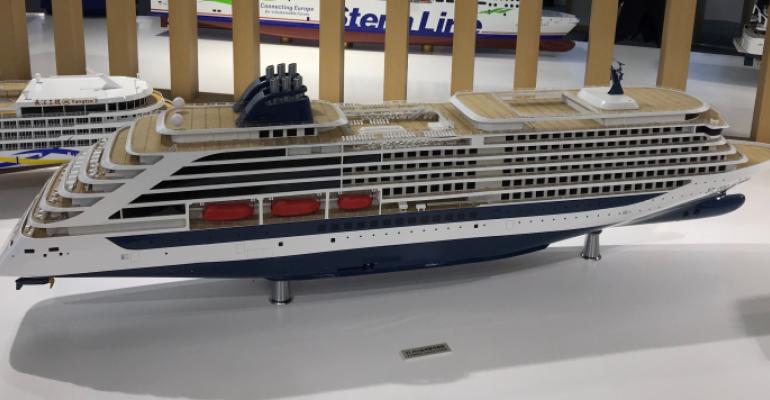 The 145 year old company which covers numerous industry and trading areas counts cruise as one of its ‘strategic units’ Hu commented.

In September, its China Merchants Industry Cruise Shipbuilding arm(CMICS)  delivered polar expedition ship Greg Mortimer, the first of 7 plus three option cruise ships for SunStone, at the Haimen shipyard in Nantong. ‘On the same day as the handover of the first cruise ship built in China we also broke the ground for a Cruise Industrial Park in Haimen to create a local supply chain,’ said Hu.

The free zone will contain a customised factory area, cabin unit production, cruise material and technology experiment testing centre, bonded warehouse and exhibition centre for suppliers to showcase products and services. The CMICS is offering financial incentives for companies to set up in the zone. The first phase will be finished end of 2020.

At the show, Italy’s Laminam a manufacturer of large scale ceramic slabs signed a LOI to set up a factory at the Industrial Park, one of six companies currently signed up.

China Merchants Shekou signed an MoU with Viking Cruises in April to form  a jv focused on building a cruise line dedicated to carrying Chinese passengers worldwide. CMICS is partnering with the jv to design and build new ocean cruise ships and negotiations are continuing.