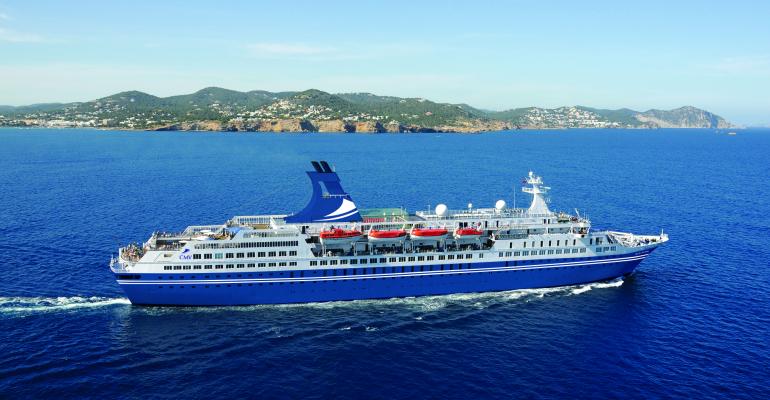 British-based cruise line, Cruise & Maritime Voyages (CMV), has launched a new brand and dedicated cruise ship for the French market and is opening a new sales office in Marseille.

Astor which has been serving both the Australian and German cruise markets with complementary summer programs since being acquired by CMV in 2013, will be renamed Jules Verne and re-deployed to the French market commencing cruise operations in Le Havre May 1, 2021.

Operating year-round under the Croisières Maritimes et Voyages (CMV) brand from both Le Havre and Marseille, Jules Verne’s maiden 2021-22 French season will include a program of 18 sailings to Northern Europe, the Mediterranean & Black Sea, a Christmas & New Year Canaries cruise and the winter season concluding with a 123 night Round the World cruise wholly for the French market and sold in four segments sailing from Marseille on January 8, 2022 and returning to Le Havre on May 11.

Jules Verne will be re-named at a special overnight Gala Event in Le Havre on April 29, 2021 followed by a second Gala Event in Marseille on May 16.

She will target the adult-only market apart from selected three generation family cruises operating during the school holidays.

Chris Coates, group commercial director commented at the Paris media launch, held in the 125mtr high restuarant Le Jules Verne within the Eiffel Tower,  ‘We are delighted to be entering the French market with Jules Verne and firmly believe that there is a real gap in the market to exploit between the larger mega resort ship operators and niche luxury cruise lines with an affordable premium positioned product.’

CMV in France will be headed by 20 year cruise veteran Clement Mousset who was recently general manager France of Celestyal Cruises, ‘we have assembled a highly experienced management and sales team ready to launch the program in the New Year’, noted Coates.

At 21,000grt Jules Verne will carry 500 guests accommodated in 289 staterooms including 42 de-luxe suites, 28 singles for the growing solo’s market and a ratio of almost 70% of accommodation with an ocean view. All the public lounges and decks will follow a French theme and all the suites will be named after famous Chateaux.

Mousset, Director Générale of CMV France added, ‘The ship is in great condition and a truly perfect fit for the French market.’

The CMV Group have much experience in serving the French cruise market having operated the 500 passenger Astoria under summer charter since 2016, to the Paris based cruise and tour operator, Rivages du Monde. This arrangement concludes in September 2020.

A new sales office in Marseille

A dedicated and refurbished new CMV sales office in Marseille, close to the Port will open for business on January 2, 2020. Mousset will be supported by 46 year old Cedric Rivoire-Perrochat as director of marketing & operations and sales team. he has 25 years of cruise sector expereince most recently as geneeal manager of CLIA France. he is also in charge of cerating Jules verne’s itineraries.

A new website with a booking engine facility will also be unveiled followed by an 80 page special edition launch brochure.

From 2020, the French office will also sell a selection of cruises onboard CMV operated vessels, Columbus, Magellan and Vasco de Gama.

Astor, currently on the German market, will operate a farewell summer 2020 and winter 2021 season with a 127 night Round the World cruise returning to Hamburg on April 14, 2021. She will then operate a special farewell 9-night voyage before under-going some minor refurbishment and re-livery works ready for the new French season ahead. She will sport a blue hull and funnel.

To meet growing demand on the German market under the Group’s TransOcean Kreuzfahrten brand, she will be replaced by a larger vessel with details to be announced shortly.

The CMV Group employs nearly 4,000 seafarers and shore side staff and in 2019 will carry almost 150,000 passengers with a turnover of €280m with further expansion plans are afoot.