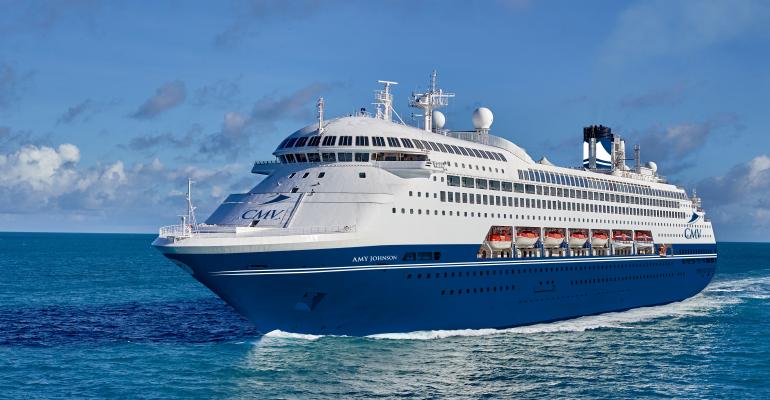 Rendering of Pacific Dawn in CMV livery as Amy Johnson

As a tribute and celebration of the intrepid and courageous exploits and journeys of past female explorers and adventurers, Cruise & Maritime Voyages is naming its two new ships Amy Johnson and Ida Pfeiffer.

The new pair will join the fleet from P&O Australia in Singapore next year.

For Pacific Dawn, CMV selected five names and invited members of its loyalty club and followers on social media, to make their favoured choice from the list of Gertrude Bell, Isabella Bird, Amy Johnson, Mary Kingsley and Lady Hester Stanhope.

Amy Johnson, a pioneering English pilot who was the first woman to fly solo from London to Australia, secured 41% of the votes.

Pacific Aria, which will sail under the TransOcean Kreuzfahrten brand on the German market, will be renamed Ida Pfeiffer, an Austrian explorer, travel writer and ethnographer. She set off on ‘A Lady’s Voyage Round the World’ in 1846 travelling to South America, China, the South Sea Islands, India, Persia, Russia, Turkey, Greece and Italy. She undertook ‘A Lady’s Second Journey Round the World’ in 1851, returning in 1855.

798 passenger cabin Amy Johnson will be deployed on the UK market in late May 2021  cruising year-round alongside Columbus ex-London Tilbury.

The 630-passenger Ida Pfeiffer will cruise alongside Vasco da Gama. adding capacity in  the German market and replacing the 580-passenger Astor. She is being renamed Jules Verne and will be redeployed to the French market in May 2021.

New flagship takes over from Columbus

CEO Christian Verhounig commented, ‘We are delighted with the chosen names and the opportunity to recognise two outstanding female adventurers and pioneers. Most of all, we are pleased to confirm that Amy Johnson will take over from Columbus as the fleet’s new flagship.’