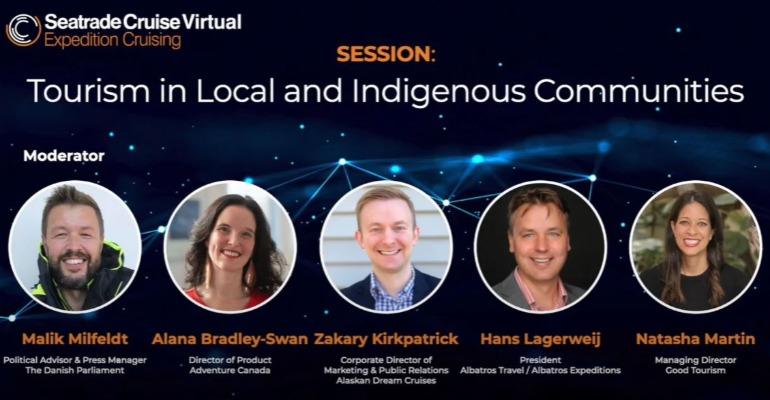 Regenerative tourism was a key topic during the discussion

In reference to  Antarctica, he said, ‘You have only so many landing sites and with the amount of ships going, you don’t want to end up in a traffic jam going through the Lemaire Channel, this is where more coordination needs to happen, but also a mind shift with these operators.

'There are plenty of landing sites, we need to stretch our creativity and imagination, and be able to convince customers that it’s exciting to go to the western side of the Peninsula that doesn’t have the famous places.’

He added, ‘Guests like to feel like one of the old explorers… if we end up with three vessels in the same tiny settlement, I would argue the settlement loses out, but also guests will lose out.’

The comments came on the first day of Seatrade Cruise Virtual: Expedition Cruising during the ‘Tourism in Local and Indigenous Communities’ session.

Zakary Kirkpatrick, corporate director of marketing and public relations, Alaskan Dream Cruises emphasised the need to ensure ‘local voices and entities are heard’; in 2016, tourism surpassed the seafood sector as the most economically significant private industry in Alaska, according to Kirkpatrick, which led those in the Southeast to call upon vessels to enter the region.‘We don’t have to ever impose our will on a community,’ he added.

The importance of liaising with local communities and identifying opportunity in areas eager for tourists was also discussed by Natasha Martin, managing director, Good Tourism who described overtourism as ‘a horrible situation that so many destinations were grappling with pre-COVID,' adding, 'It ruins the experience, it ruins the environment, it ruins the economy.’

In discussing the need to help remote communities ‘understand how their place is going to change as a result of welcoming tourism… and anticipate the changes,’ Martin also shared her views on undertourism. ‘[it] is something I see in developing countries where there’s a lot of investment in infrastructure and training...but they [tourists] don’t come. This is a big issue in some small communities, to manage expectations; it’s not a case of “build it and they will come,” a lot of the time in rural and remote places.’

Highlighting the need for regenerative tourism, Kirkpatrick reflected the need for expedition cruise passengers to respect the routines of those in areas visited, even if this temporarily disrupts itineraries - during important agricultural festivities in locations where people follow a subsistence lifestyle, for instance.

In response to Danish Parliament Political Advisor and Press Manager Malik Milfeldt’s assertion that ‘It’s much more complicated to do expedition today,’ Alana Bradley-Swan, director of product, Adventure Canada said, ‘20-years ago there were much less operators out on the water in terms of expedition cruising, the places we went to had been hardly ever visited and there was a sense of true exploration… [but] it’s more mindful and more conscious today,’ before she discussed new community guidelines from AECO [The Association of Arctic Expedition Cruise Operators].

Lagerweij added, ‘Fortunately there’s a lot of coordination and good discussions, [cruise] it’s probably one of the best organised industries, with AECO and IATO [The International Associations of Antarctica Tour Operators]’ and discussed new opportunities arising for local groups as a result of expedition travel. ‘We really aim to hire locals…[passengers] don’t want to meet the western world when they go into remote areas, they want to meet authentic people from those locations and learn from them.’

Kirkpatrick concurred that, ‘Sharing their culture is more important than money.’

In focussing on ‘the limits of acceptable change,’ Martin appealed for ‘good impact’ and ‘positive changes.'

‘It’s within the possibility of tourism,’ she added, '[but] it’s been left on the wayside.’