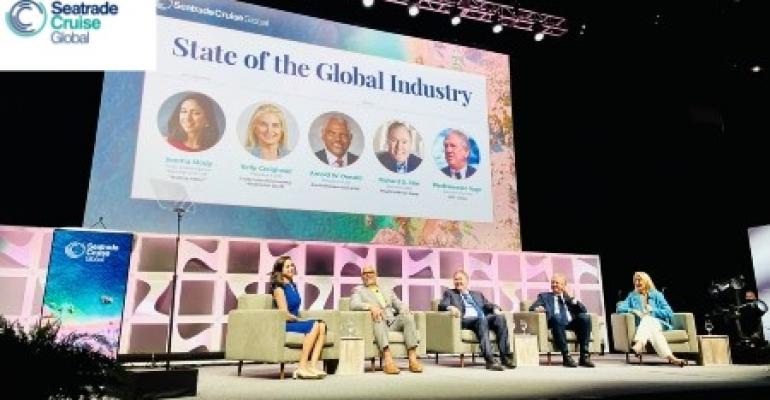 Cruise leaders didn't dwell on pandemic negatives at Seatrade's State of the Global Industry keynote today but looked forward, noting that health protocols are working, guest satisfaction is high and occupancy is climbing.

Richard Fain, chairman and CEO, Royal Caribbean Group, said he expects ships in core markets to be back to 100% occupancy by the end of this year.

'Every day, we're getting further and further along the road of demonstrating how [effective our protocols are],' Fain said.

'People have moved from the zero-risk mindset,' according to Arnold Donald, president and CEO, Carnival Corp. & plc. They're used to dealing with risks in their daily lives, he said, and those who've cruised are 'comfortable' with the environment because they know how much care is taken on board.

'The most powerful marketing tool there is is word of mouth. As we continue to sail safely and successfully and people have the time of their life, they're going to communicate that,' Donald said.

'Our guest satisfaction [level] is amazing,' Fain asserted. 'We all assumed' the rebound would be fueled by experienced cruisers, however, Royal Caribbean is actually attracting first-timers thanks to the protocols, and to innovation.

The cruise industry had 16% of its fleet operating in June, now it's at 56% and is projected to be 80% by end of December, with 220 oceangoing ships carrying passengers by then, CLIA Global Chairman Pierfrancesco Vago said in his keynote address. Taking the stage for this live event in Miami, Vago pumped his arms and said: 'Hello, Miami! It's great to be back!'

Craighead also stressed cruising's economic importance to people around the world, showing a video with workers like a PortMiami longshoreman, a Juneau shopkeeper, ship's crew and officers who all conveyed appreciation for their cruise industry jobs and said these enable them to support their families.

The panel sidestepped moderator Seema Mody of CNBC's questions about Florida Gov. Ron DeSantis and whether the Trump or the Biden administration is more cruise-friendly.

'Gov. DeSantis is a strong supporter of the cruise industry,' Craighead said, adding that what's reported can't always be believed. She said CLIA has a good relationship with governors, the Biden administration and officials in the rest of the world.

Craighead noted cruise ships weren't sailing from the US when President Biden said he hoped to have the country open by July 4 but the administration is aware of cruising's $55.5bn contribution to the US economy and the fact that it draws 2.5m international visitors to the US in a normal year.

'We're dealing with hundreds, if not thousands of administrations' around the world, Fain pointed out.

As for new companies like Virgin Voyages, Fain indicated: bring 'em on. It's like when Disney expanded into cruising: 'New players benefit us because they attract attention ... They're adding more to the demand than they are to the supply,' he said.

The real competition, according to Fain, is land-based vacations and other discretionary purchases like wide-screen TVs.

'We're a tiny industry with 30 million cruisers [annually] pre-COVID, while there's opportunity of over half a billion people a year who take take vacations,' Donald added.

The cruise leaders also talked about the importance of ESG matters, and said those continue to be priorities even during the pandemic. All the companies professed to be working toward decarbonization.

Vago challenged governments to help wth the development of alternative fuels to meet decarbonization goals, noting that lines are doing their part but the issue is emissions created from well to wake.

Cruise industry greenhouse gas emissions are barely measurable in the grand scheme of things, Donald said, adding that many other industries could say that, too, but it's the cumulative impact that's inportant.

The Carnival chief cited efforts like building LNG ships — a bridge to reduced emissions, not the solution, Donald added — and the use of exhaust gas cleaning systems, shore power and work with fuel cells, lithium batteries and biofuels, among other initiatives.