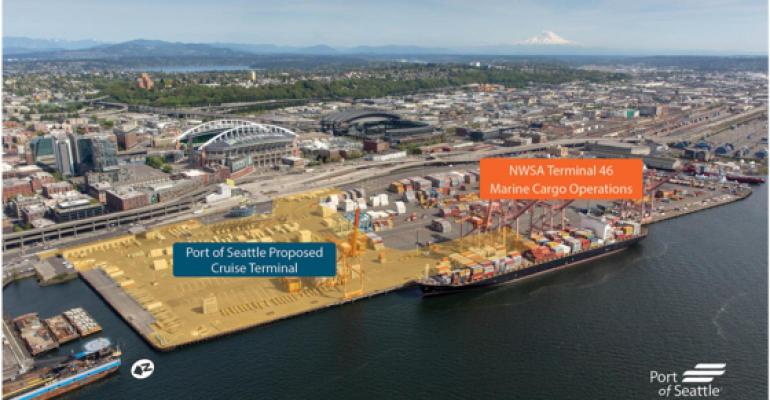 Terminal 46 is shown here, with the site of the proposed cruise facility in blue

The new cruise facility at Pier 46 is among 2020 budget cuts at the Port of Seattle.

The Port of Seattle Commission announced nearly $70m in cutbacks amid the coronavirus pandemic, according to the Seattle Times, which said it's not clear when the port will restart the Terminal 46 development, or the dozens of other delayed aviation and maritime development projects.

'The decision to put the new cruise terminal on hold is based solely on our need to better understand the impact of COVID-19 on the Alaska homeport cruise market before moving forward with the project,' Port of Seattle spokesman Peter McGraw told Seatrade Cruise News.

'We will provide an evaluation of those impacts and a recommendation on next steps as part of the port’s capital budget process later this year. The analysis will consider impacts of COVID-19 on the 2020 cruise season, health and safety regulatory requirements, industry and market forecasts, and economic benefit.'

In the meantime, he added, work on all elements of the proposed cruise project will be paused.

The Times said 'a significant portion' of projected $26m in cruise revenues are at risk. Lines are currently under a US 'no sail' order and Canada has closed ports to certain cruise operations through June. Recently cruise operators announced dramatic changes to their Alaska cruise plans this summer, including some outright cancellations.

So far, though, companies like Princess Cruises and Holland America Line are keeping their Seattle-based programs, though those will be delayed.

In February the Port of Seattle issued a revised request for proposals for the new cruise facility at Terminal 46 with additional environmental elements.

The updated RFP went to shortlisted proposers being evaluated as potential investment and operating partners. The estimated $200m facility would entail a $100m investment from the port and the balance from a partner.