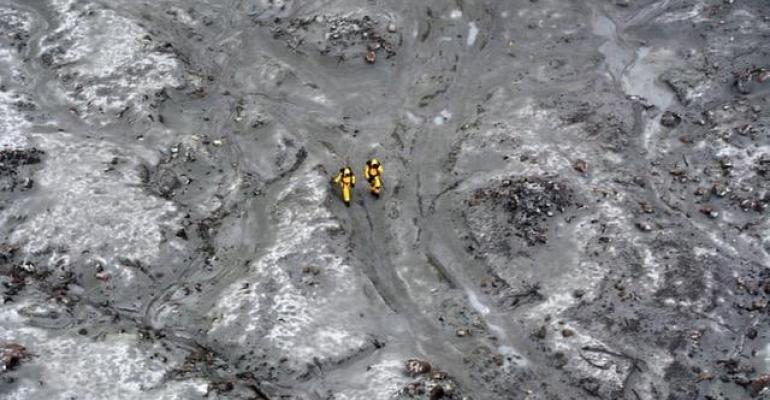 Two members of the recovery team on White Island

An elite New Zealand military team has carried out a high-risk operation to recover six bodies from Monday’s volcano eruption on White Island.

The team of six men and two women included members of the Explosive Ordnance Disposal, known as E Squadron and part of the covert SAS.

They wore hooded yellow protection clothes and had closed-circuit oxygen tanks to cope with the mountains of ash and toxic gas on the smouldering island.

E Squad’s motto — ‘Into Harm’s Way’ — could not have been more appropriate, with scientists warning there could be further eruptions.

A Royal New Zealand Air Force helicopter transported the dead to HMNZS Wellington, which was standing by a short distance away.

Dive teams were deployed in the waters around the island and aerial searches continued to locate two more bodies.

Rear Adm. James Gilmour said the operation was well planned, but not without risk.

‘We cannot downplay the risk involved in this operation and I acknowledge the efforts of all those who placed themselves potentially in danger,’ Gilmour said.

It is understood 47 people, including a tour group from Royal Caribbean’s Ovation of the Seas, were on the island when the volcano erupted on Monday.

Many survivors, listed as critical, are in local hospitals suffering horrific burns. Such is the severity of the injuries, formal identification of many victims is still to be formalised.