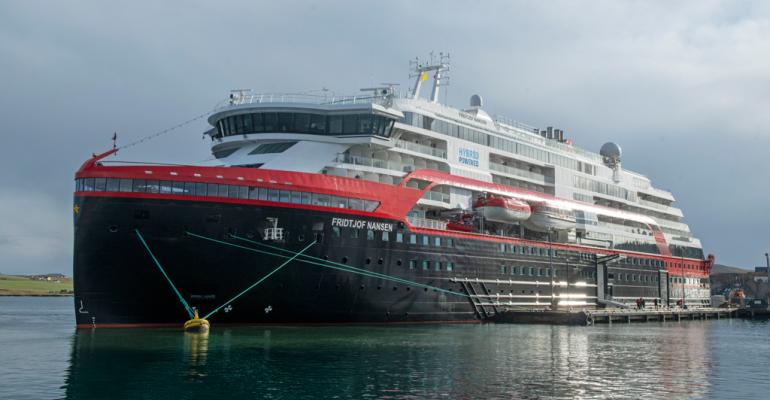 First visitor of the new season at Lerwick Harbour, Hurtigruten’s Fritdtjof Nansen
Lerwick Harbour’s 2020 cruise season launched Wednesday with the arrival of the first vessel of the year and the prospect of more new port records by autumn.

The 21,765gt Fritdtjof Nansen, with capacity for 530 passengers and 150 crew, berthed at Victoria Pier at the Shetland port while en route from Bergen, Norway, to Kirkwall, Scotland.

Hurtigruten’s new expedition vessel has been delivered early and is undertaking pre-inaugural shorter voyages which can be joined in the UK. It is the first hybrid battery-powered cruise ship to visit Lerwick.

Lerwick Port Authority Cruise Manager, Melanie Henderson, said: ‘It’s always good to have an early start, maintaining the recent trend for seasons to extend at both ends, into February and October.’

Lerwick is expecting to handle more than 100 ships this season for the first time, and over 90,000 passengers.

‘As well as repeat visits, three operators - Carnival, Mystic and TUI - will be newcomers to Lerwick for the first time, adding to the significance of the season.’

There are currently 115 vessels booked to call at Lerwick, up 16% on the previous best in 2019 and including 15 maiden calls.