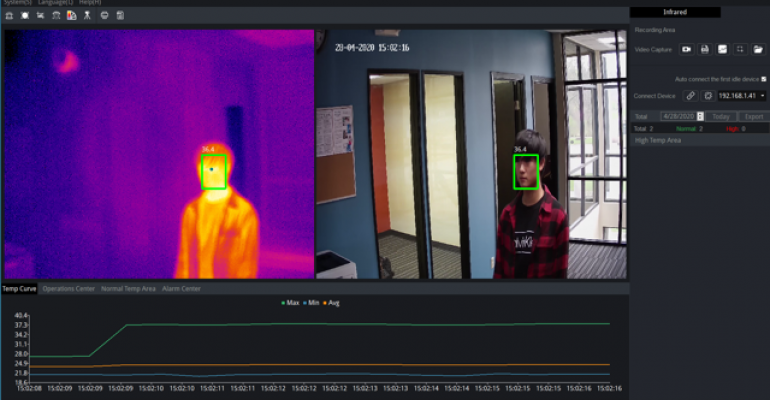 One side of a split-screen monitor shows the thermal image with each person's temperature. The other side captures a high-definition photo so it's easier to identify those with an elevated reading
Temperature checks are likely to become part of the COVID-19 tool kit — not only accepted but expected by travelers.

But touching a thermometer to the forehead takes time. And when it comes to the cruise environment, veteran industry operations executive Roger Blum said, it's important to do things quickly, efficiently and less invasively — people are going on vacation, after all.

That's why Blum's advocating the EMA system. It uses a thermal imaging camera to scan multiple people as they walk past, making it suitable for high traffic areas such as cruise terminals, ships' gangways and destination attractions.

'This can scan numerous people at once. It's quicker and less intrusive,' said Blum of Miami-based Cruise & Port Advisors, the US representative for the technology.

'Within a few months we're going to see thermal imaging all over the place — at shopping malls, sporting events, movie theaters,' he continued. 'It's going to make people feel [safer]. People will expect to see visible protocols [for COVID-19 screening].'

The China-manufactured EMA system employs advanced thermal imaging to clock multiple body temperatures and an artificial intelligence (AI) image-processing algorithm to quickly capture the faces of people passing the tripod-mounted camera. One side of a split-screen monitor shows the thermal image with each person's temperature. The other side captures a high-definition photo of the group, so it's easy for the operator to single out people for a secondary screening.

This is an improvement, Blum said, on older generation models that showed only silhouettes. The temperature threshold can be set by the operator, and the system is accurate within 0.3 degrees C.

It's also very portable. Once the ship sails, it can be placed in high-traffic areas like the dining room entrance or the crew mess. Another advantage, according to Blum: 'This system appears to be quite a bit less expensive than other systems with similar capabilities.'

At least one system per entrance (gangway) and a spare are recommended.

Established in 2006, EMA has deep expertise in AI. It has manufactured thermal imaging systems for five years and 5,000 are currently in use in China, Europe and, most recently, by the University of Iowa Hospitals & Clinics.

Blum said Cruise & Port Advisors can also supply face masks, customized with logos if desired, and amenity packets including masks, hand sanitizers and wipes that can be passed out in cruise terminals or aboard ships.