Europe could be cruising by July, but US 'big unknown': AmaWaterways' Schreiner 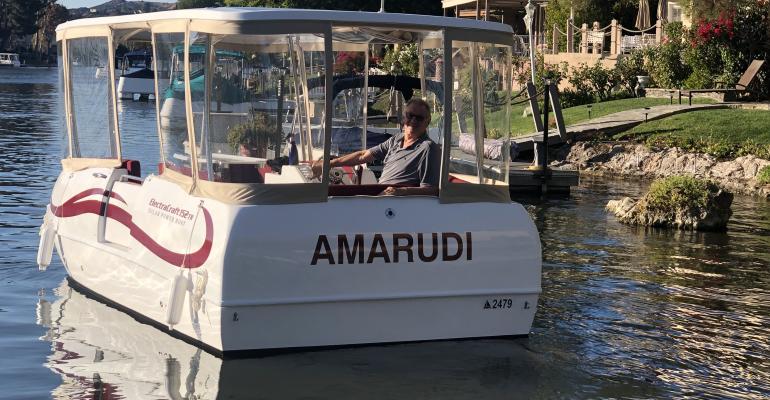 Working from home — Rudi Schreiner is able to relax at day's end on his fully solar-powered boat AmaRudi, docked steps from his house in California

Some European river lines hope to be cruising by late June, but it's not clear if Americans — who lag on the coronavirus curve — will be allowed to travel there.

So said AmaWaterways' Rudi Schreiner who, even so, predicts the river business will come back faster than ocean cruises yet US market recovery is 'the big unknown.'

'The question is: If Europeans cruise, will Americans be allowed?' said Schreiner, president/co-owner of AmaWaterways and often called the 'godfather of river cruising' for his vast expertise. It's possible recovering European countries could turn away Americans for a time.

Another great unknown is the course of the virus in South America, Africa and parts of Asia. A further wave of COVID-19 from those places could hamper recovery, too, by triggering resurgences elsewhere.

Schreiner is in touch with numerous European river operators, and some expect to be running in late June/July. This is based on the fact that COVID-19 appears to be peaking in Europe now, while the United States is behind.

'I think Europe will be ready in June-July and Europeans will start cruising,' he said. 'The big unknown is will Americans be allowed or not?' A further complication is that different parts of the US are harder hit than others.

Hoping for August but prepared for worst case

'I hope that by August-September, we'll be cruising. I hope we can cruise earlier,' Schreiner told Seatrade Cruise News. 'If we cruise earlier, great. We are ready,' he said in a one-to-one interview on the business climate, workforce, government support, the distribution network and more.

It's tough to know how things will play out, though.  That's why he's prepared for a worst-case scenario — no 2020 season. It would mean not sailing again until mid- to late March 2021.

AmaWaterways' operations are currently suspended through May. Schreiner said finances will be fine through 2020 whatever transpires, since the company is virtually debt-free and has consistently plowed profits back into the business in lieu of paying dividends.

'It's still a family-based environment,' he said. 'The main thing is the safety of the guests and keeping the employees where they are ready to begin working' as soon as needed.

Why river may rebound faster

Schreiner pointed to the differences favoring river recovery over ocean travel: 'We offer a different environment, like a floating hotel. We're always within national borders. More time is spent on land.'

Recovery is likely to be highly regional and source-market dependent, he believes, citing how China is ahead in its recovery and cruises may be able to resume there before elsewhere.

Like many operators, AmaWaterways has a policy to encourage rebooking instead of refunds, and travel advisors are working hard to get clients to stick. A 115% future cruise credit is offered, and commissions are paid at the time of the originally scheduled departure with another 10% on the future booking. If the client cancels, there's no commission. Travelers can rebook through 2022; if they don't, they'll get a refund.

While it's hard to be precise in this fluid period, Schreiner estimated about a 50-50 rebooking/refunds rate, or perhaps 40-60, weighted to refunds.

Almost half his company's business involves groups or charters, and many of those are rescheduling. For example, with the once-a-decade Oberammergau Passion Play postponed from this year to 2022, groups that were packaging that with an Ama cruise are nailing down 2022 dates.

All AmaWaterways-owned vessels are paid for, even this year's newbuild, AmaSiena, with AmaLucia set to arrive in 2021. The last 10 ships were paid in cash — saving 'a lot of money, besides interest, lots of other fees. We pay as we go,' Schreiner said.

'There is no debt on any of our ships. I can sleep at night.'

The Danube fleet is currently idle in Linz, Austria, while the Rhine vessels wait in the Netherlands. Two to three nautical crew live aboard each to maintain them.

As far as the crew, all are outsourced — the eight to 10 nautical crew per ship from Rivertech in the Netherlands, and the 40 to 50 hotel/restaurant staff from SeaChefs in Hamburg. Both these European companies are tapping into labor support programs available from various national governments.

For example, all AmaWaterways' captains, staff captains and chief engineers have Swiss contracts, and Switzerland is subsidizing 80% of their salaries for six months.

As for entertainment companies that provide the artists for hundreds of performances on the ships, they're able to show contracts for next year and can apply for government support to tide them over.

Direct Ama employees include 15 in Basel and 12 in the UK, and Schreiner expects government assistance.

In the United States, the $2 trillion CARES Act has provisions for small businesses like AmaWaterways and for the important travel advisor community which accounts for 95% of its sales.

Large consortia like Signature and Virtuoso already have legal advice to ensure the maximum for their members, while big agencies like Tzell and Frosch are also focused on this, Schreiner said. He believes AAA agents in the US are well-secured, while Vancouver-based Expedia CruiseShipCenters is looking into Canada's support programs.

AmaWaterways employs roughly 220 North Americans — mainly in its Calabasas, California headquarters, with a branch office in Texas, and four people in Canada. Schreiner aims to keep them all, and said the CARE Act facilitates that by providing loans to businesses with under 500 employees that eventually convert into grants if workers are kept on.

AmaWaterways has been keeping in touch with the trade via almost weekly webinars. More than 2,000 — double the number that can be accommodated — registered for the one today, led by EVP and Co-Owner Kristin Karst, SVP Sales Gary Murphy and VP Sales Alex Pinelo, with supplier guests. Schreiner predicts future webinars will be oversubscribed, too, since many retailers are taking this time to bone up on knowledge.