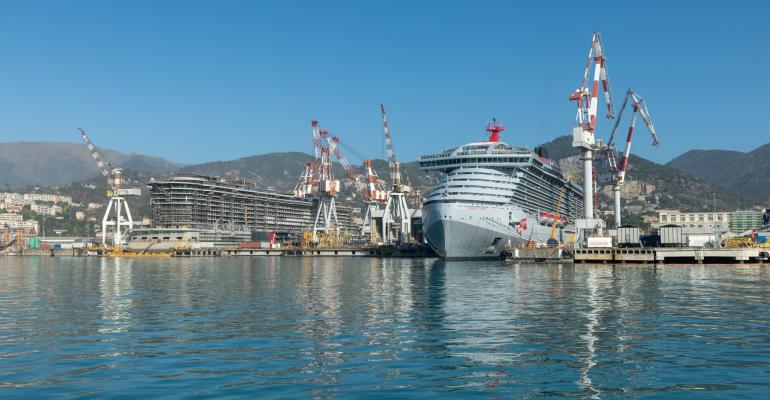 There she is. Scarlet Lady was built with numerous energy-saving features. At left, sister Valiant Lady is under construction

Friday update: The ship has been officially delivered and was set to depart for Dover today.

Particular attention was paid to energy recovery, with cutting-edge technologies that reduce the ship’s overall environmental impact. For example, Scarlet Lady is equipped with an energy production system of approximately 1 MW that uses the diesel engines’ waste heat.

UK previews, then on to Miami

Scarlet Lady is scheduled to visit Dover and Liverpool in late February to host first mates (travel advisors), media and VIPs for a number of exclusive events before crossing to year-round home, PortMiami.

From Miami, two sneak-a-peek sailings are set on March 26 and March 29 before the April 1 maiden voyage.

Next up: Valiant Lady

Sister ship Valiant Lady is under construction at the Sestri yard for delivery in 2021, while the third and the fourth newbuilds are due in 2022 and 2023. Valiant Lady is planned to debut in the Mediterranean,