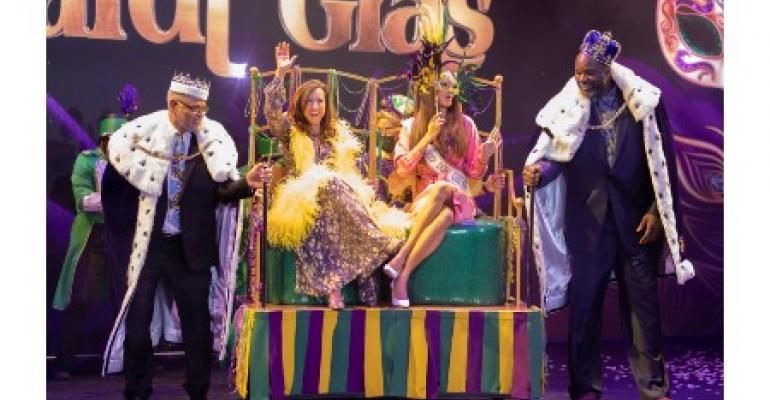 The parade rolled out after Jiménez pushed a button to send a Romero Britto-decorated bottle of Champagne smashing on the hull.

The celebration in the ship's theater opened with another parade — this one of crew members representing some of Mardi Gras' 1,700 seafarers from 120 nations bearing the flags of their countries.

'This is what Carnival is all about — all one nation, all one family,' Duffy said, adding: 'The reason I love my job is because I do love our crew.'

Duffy called Mardi Gras a 'symbol of great excitement and renewal for our company' and its June arrival at Port Canaveral to thousands of cheering fans was a 'beacon of hope at a time when we truly thought we could begin saiing from the US.' Today, 13 Fun Ships are carrying passengers.

(The day coincided with Duffy's 40th wedding anniversary with husband Andrew and their daughter's birthday.)

'Mardi Gras is much, much more than a ship,' Donald underscored. 'It symbolizes and celebrates our past and, importantly, it heralds our future.'

Donald noted Chairman Micky Arison had been on the 1972 inaugural voyage of Carnival's first Mardi Gras, and recognized PPI Group/Porthole's Bill Panoff, who was a cruise director on that ship.

Among others acknowledged were Thomas Weigend of shipbuilder Meyer Group; Capt. John Murray and Port Canaveral, which built the new Terminal 3 for Mardi Gras and facilitated bunkering for this first LNG-powered cruise ship in the Americas; and Carnival's travel agent advisory board. Others getting shout-outs were Shaq, whose Big Chicken venue is one of the most popular spots on board; master chef Rudi Sodamin, whose Rudi's Seagrill is a new fine-dining option; Ben Clement, SVP newbuilds, and other members of Duffy's senior executive team: Ken Tate, Lars Ljoen and Neil Palomba, along with Capt. Vincenzo Alcaras and senior officers.

Father-daughter military veterans Norman McCain, who served in the Korean War, and Robin McCain Alpine were saluted on stage, since Carnival claims to carry more military personnel than any other line, and Mardi Gras has a Heroes Tribute Bar with a portion of proceeds benefiting Operation Homefront. Another Carnival partnership, with St. Jude Children's Hospital, is represented by an installation created from the art of St. Jude patients.

Besides the godmother, other pageant winners featured at the naming were Miss Universe Andrea Meza of Mexico and Miss USA Aysa Branch.

'I'm just happy,' newbuilds team leader Ben Clement said about Mardi Gras. 'After five or six years of working together and bringing it to life, it's so rewarding when everything you thought about and wanted to do has come to life.'