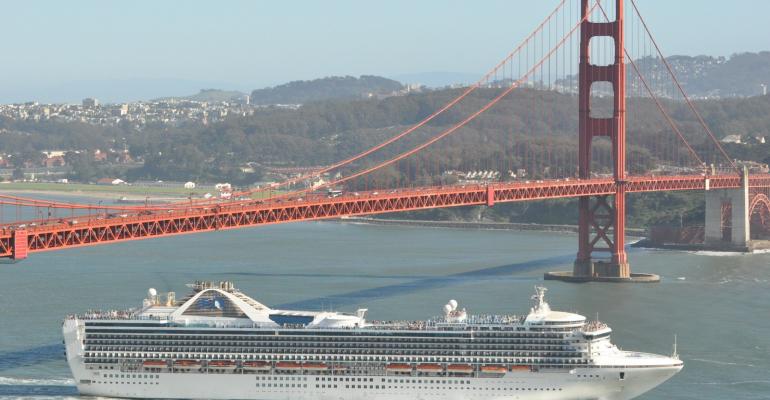 Grand Princess passed under the Golden Gate Bridge Monday en route to docking at the Port of Oakland
Tuesday afternoon update: As of 10 p.m. Monday, 407 people had disembarked, including the two passengers diagnosed with coronavirus. They and their traveling companions were transferred to local hospitals. The 19 crew who tested positive were deemed asymptomatic and were not disembarked; they're isolated in their individual cabins.

Grand Princess arrived Monday at the Port of Oakland where those needing medical attention were the first to disembark.

Everyone headed to quarantine

All 2,421 passengers will be going into a 14-day quarantine ashore.

Last week 45 people on board were tested for coronavirus and 21 were positive, including two passengers and 19 crew.

The ship arrived alongside a commercial berth where workers wore protective gear and buses and emergency vehicles awaited. Some of those needing medical treatment had non-coronavirus-related issues.

The next scheduled to disembark were the 962 California residents, who were to be transferred by bus to Travis Air Force Base in Solano or Marine Corps Air Station Miramar for testing and quarantine, according to the California Office of Emergency Services.

Then non-Californians will disembark and be transported by the federal government to facilities in Georgia (Dobbins Air Reserve Base, Marietta) and Texas (Lackland Air Force Base, Bexar County). International passengers were reportedly going to be sent home on charter flights from a part of Oakland International Airport that would be separated from the public.

Crew quarantine on the ship

The 1,113 crew will be quarantined aboard Grand Princess. If any need more acute medical care, they will be transferred to an appropriate facility in California, the Office of Emergency Services said.

The ship was expected to stay alongside in Oakland for just two to three days.

It has not been announced where Grand Princess will go after this. The March 7 cruise had previously been canceled and now so has the March 22 departure. Both were to sail round-trip San Francisco.

Passengers on the disrupted voyage are getting a full refund.