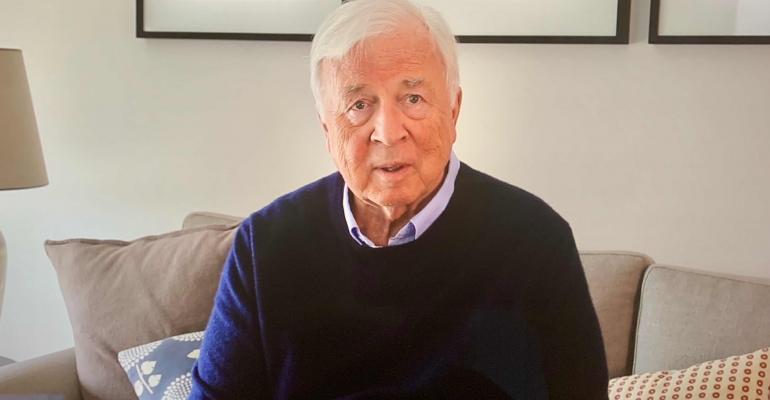 'We will be using this period of non-operation to work on further scientific steps to reduce health concerns about travel on cruise ships,' Torstein Hagen said

'These are truly unusual times, but adversity is also part of life. What really matters is how we deal with it.'

So began Viking Chairman Torstein Hagen's reassuring video address to customers today. He touched on everything from extending the company's suspension of service, to how it's treating the crew, its financial backing, the new Mississippi vessel and an antidote to the seemingly unending stream of bad news.

Recalling challenges like the stock market crash of 1987, 9/11 and the global financial crisis, Hagen remembered how overwhelming they seemed at the time, but in hindsight, 'We can see how resilient we are.'

The stock market rebounded to new heights and people returned to explore the world in record numbers. 'Though it may look dark now, history shows we will work through this together,' he said.

Viking was the first cruise operator to suspend service, and in stretching that by two more months, it's also allowing more time than others have announced — until July.

'We will be using this period of non-operation to work on further scientific steps to reduce health concerns about travel on cruise ships,' Hagen said, adding: 'And I can assure you, we will only sail again when it's safe.'

Status of passengers and crew

Hagen said all guests but 14 are home, and eight of those are the sole passengers on Viking Sun as it heads to the UK. As for the crew, he expressed great appreciation and said those on the ocean ships would be retained until service resumes. Since the river season hadn't started, those crew were still home but arrangements were made for their compensation.

The Viking chief also assured the company's financial position is solid after an 'outstanding 2019,' adding that besides himself and his family, outside investors TPG, the private equity firm, and CPPIB, the Canadian pension plan investment fund, 'stand behind us.'

Hagen spoke from his apartment in Lucerne, Switzerland, where he's one of the many people working from home. That makes it tempting to frequently look at the news, he said. 'I don't mind facts. But I don't think it's healthy for the mind to have a constant barrage of negative images ... '

To that end, led by his daughter Karine, Viking's EVP, the company launched an experience channel, VikingTV, 'a venue where we can all be connected.'

VikingTV will offer live-stream sessions with Hagen, messages from the crew, entertainment hosted by some of his favorite artists, Viking-sponsored concerts, resident historian lectures and a live tour of Highclere Castle, the setting for 'Downton Abbey,' guided by Karine's friend Fiona, the countess of Canarvon and a Viking Longships godmother.

There will even be fun content for 'your grandchildren from my grand pup Finse,' Hagen added.

In addition, he announced the opening of bookings for Viking Mississippi, whose modern style and many Vikingesque features were revealed today.