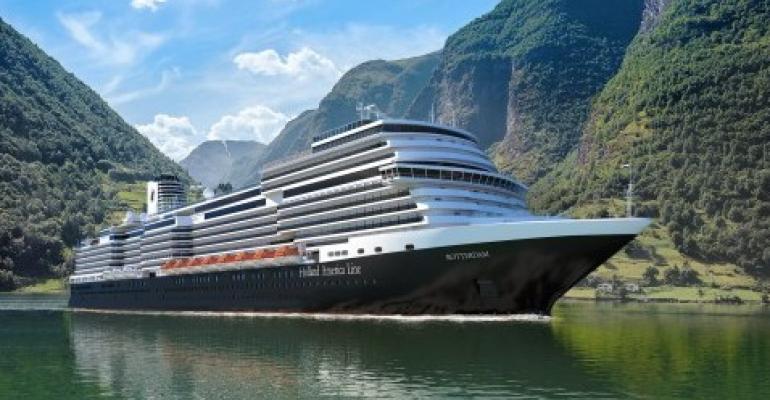 Also, Rotterdam — seventh ship to carry the name for Holland America — will be designated as the fleet's flagship. Third in the Pinnacle class series, the 99,500gt vessel has capacity for 2,668 passengers.

When Rotterdam is delivered by Fincantieri’s Marghera yard, it will spend the summer in Northern Europe and the Baltic on round-trip cruises from Amsterdam.

Passengers who were booked on the premiere voyage in May and on cruises through July are being contacted with rebooking options.

'The first ship for Holland America Line was the original Rotterdam, the company was headquartered in the city of Rotterdam for many years and the name has been a hallmark throughout our history since 1872, so clearly the name is powerful and symbolic,' HAL President Gus Antorcha said. 'With the current Rotterdam leaving the company, we knew we had a unique opportunity to embrace the name as our new flagship and carry on the tradition of having a Rotterdam in our fleet.'

The first Rotterdam sailed its maiden voyage from the Netherlands to New York Oct. 15, 1872, and led to the founding of the company on April 18, 1873. Rotterdam II was built in 1878 for British Ship Owners Co. and purchased by Holland America Line in 1886.

Rotterdam III came along in 1897 and was with the company until 1906. The fourth Rotterdam joined the fleet in 1908 and also served as a troop carrier when World War I ended. Following the war it made regular cruises from New York to the Mediterranean.

Rotterdam V, also known as 'The Grande Dame,' set sail in 1959 and began rans-Atlantic crossings with two classes of service. It later converted into a one-class ship in 1969. Rotterdam V served HAL for 38 years until 1997, and currently is a hotel and museum in the city of Rotterdam.

Rotterdam VI, the most recent to cruise for Holland America, was introduced in 1997 as the first in the R class. It recently was sold to Fred. Olsen Cruise Lines.

Rotterdam VII's seven-day premiere voyage is scheduled to depart from Trieste, Italy, on Aug. 1 next year, with calls in the Adriatic Sea and southern Italy. The cruise ends at Civitavecchia (Rome), from where a 14-day western Mediterranean voyage ends at Amsterdam.

From Aug. 22 through Oct. 10, the ship will sail round-trip from Amsterdam on three seven-day cruises to Norway, then a pair of 14-day voyages, one to the Baltic and one to Norway, Iceland and the British Isles. A 14-day trans-Atlantic crossing from Amsterdam repositions the ship to Fort Lauderdale.

To accommodate travelers on canceled Ryndam itineraries from May through July, Nieuw Statendam cruises will see some changes to match up as much as possible with the former Ryndam sailings.