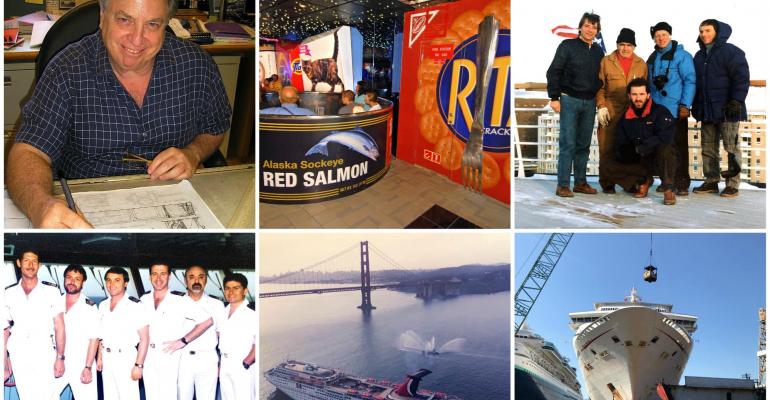 A Carnival blog described an 'emotional moment for all crew on board as Carnival Fantasy arrived at a Turkish shipyard for recycling, ending an incredible 30-year run as one of the most successful ships in cruising.' Inspiration is next.

The blog noted 1990's Fantasy introduced many firsts for the company, from a soaring, seven-deck atrium and a massive navigational bridge to a luxurious spa, acres of open deck space and unique, unforgettable interiors like the Cats Lounge.

Novel in the three-/four-day market

Fantasy was also a rare brand-new ship for the three-/four-day cruise market — back then, it was typical for older vessels to operate those entry-level itineraries. And the 70,000gt vessel, big for its time, kicked off a series that would stretch to eight sisters — for many years, a record in cruising.

Inspiration was the sixth of those, debuting on the US West Coast in 1996 and for the last nine years operating a short cruise program from Long Beach, California.

'Both were fabulous, groundbreaking ships and stood up well against the test of time,' Gallagher said.

Finland's Wärtsilä Shipyard went bankrupt when Fantasy was under construction, a victim of the Soviet Union's collapse because many Soviet icebreakers were built there. Carnival temporarily acquired the yard, backing new management, to complete Fantasy and the second ship, Ecstasy.

Fantasy was delivered in the dead of winter. 'Not only do I remember the rough crossing, late arrival at Port of Miami and intro media events, but all the dedicated office staff and shipboard officers and crew that worked so hard and long to make everything look smooth. (It wasn't),' Gallagher wrote in an email.

'After spending lots of time talking to [architect Joe Farcus] to put together the press kit, when I saw the real thing I was in awe,' Gallagher said. 'The color-changing atrium was jaw-dropping. We under-promised and over-delivered.'

Farcus, who designed all the Fantasy-class ships and many others, is sanguine about Fantasy's end. 'My thoughts are nostalgic but not really sad,' he told Seatrade Cruise News.

Profit and prestige for Carnival

'I retain the pride I felt when I first boarded the finished ship. She became what she was intended to be and had a more than successful life. The series of eight sisters were extraordinarily popular and brought profit and prestige to Carnival. CCL became the front-runners of the industry during this period.'

Farcus said he likes to live in the present and by authoring 'Design on the High Seas. Setting the Scene for Entertainment Architecture Aboard Cruise Ships' (2018), 'The Fantasy lives in the book and in history ... She will be that new, groundbreaking ship to us that she was at delivery. What could be better!'

Former longtime Carnival operations executive Roger Blum was on the design team and at the shipyard for the delivery and initial departures of all eight Fantasy-class vessels.

Awe for a 'giant' vessel

'There are too many wonderful memories, but as much as I knew the Fantasy on paper, I will always remember my awe the first time I actually walked around this giant vessel,' Blum said. 'Both vessels departed Helsinki in the winter, but the Inspiration departure stands out, since we were literally frozen to the pier and couldn’t move.

'It’s sad to know they have finished their wonderful lives.'

Shahnaz Kashanipour, current guest operations leader, former crew purser on Fantasy, remembers joining the ship at the yard. 'It was so huge I thought, “Wow, will this thing really float?” When we left the yard, we needed icebreakers to sail and it was a very rough journey to Miami. I remember Capt. Gavino telling me that we didn’t have communication with the office for a few days and when we finally connected, they asked “Where are you?” as in those days we only had the radio room.'

The ship is even responsible for at least three marriages — maybe many more — and certainly plenty of romances.

Angelo Virgona, current technical operations manager, was second engineer on Fantasy when he met his future wife MariaElenea, an assistant shop manager, in 1997. She went on to become one of Carnival's first corporate trainers.

Jo-Anna Manolas Grubjeąić met her husband, current Carnival Glory Capt. Pero Grubjeąić, aboard Fantasy in 2001 when she was a dancer and he was a third officer. 'Only one stripe, he had hair, and we were both skinnier,' she quipped. They have two daughters who 'love cruising with daddy.'

Capt. Alessandro Galotto was safety officer during Fantasy's construction. Soon after he was promoted to staff captain and 'had a blast under the command of Capt. Gavino and Capt. Francolla.' Fantasy was also his first ship as captain in 1996 and he met his future wife on board.

Capt. Gaetano Gigliotti, currently VP nautical & port operations, was a third officer on Fantasy as part of its inaugural team in 1989 and returned in 2006 as captain when Fantasy became the first cruise ship back in New Orleans after Hurricane Katrina.

He recalls arriving in Helsinki the day Wärtsilä went bust, 'a national disaster as the yard was a major employer.' He walked around buoys and 'on water' during the brutal Finnish winter and 'During the crossing I learned the might of the Atlantic in winter.'

Capt. Vittorio Marchi took part in the final stage of Inspiration's construction and served as master of Inspiration and, later, Fantasy, his last Fantasy-class command before moving to the Conquest class.

'It was an honor to have been at the helm of our oldest vessel considering that we started working together for Carnival around the same time and we both have lots of stories to share ...

'Farewell, Fantasy and Inspiration — it is like a part of my heart is gone with them.'