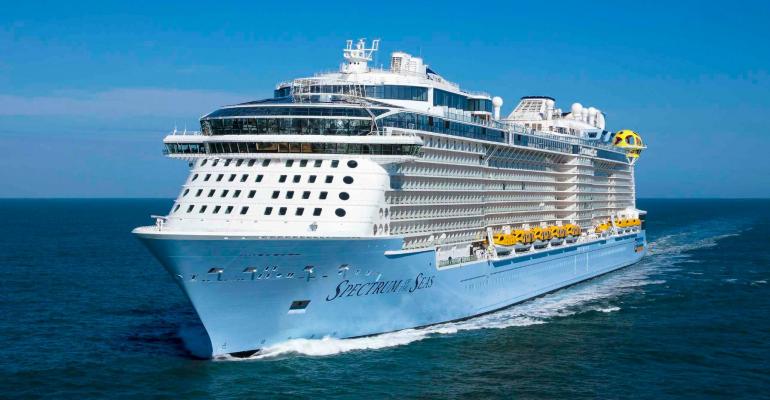 All the 400 crew members were tested negative for COVID-19 and a hotel had been designated for their 14-day quarantine.

Since the COVID-19 pandemic, Spectrum of the Seas is the second international cruise ship berthed at the Shanghai port after Quantum of the Seas, which returned to China in April.

In response to the extended cruise ship bans by Canada and Australia, along with the ongoing uncertainty of ports reopening for cruise ships in Taiwan, Japan and South Korea, Princess Cruises confirmed further cancellations.

These include cruises to and from Australia departing Aug. 29 to Sept. 1 on Sea, Majestic, Sun and Sapphire Princess.

Round-trip Keelung cruises Aug. 5-23 on Majestic Princess will not operate, either.

The line is offering a 125% future cruise credit that may be used until May 1, 2022, and continues its ‘Double your Deposit’ offer. Or a full refund can be requested online.

The spokesman said there is strong demand from members to proceed with this year’s graduation from Ambassador status to Cruise Master even if it cannot be held aboard a ship.

‘While cruise operations are suspended it isn’t possible to announce plans for the annual Masters Conference,’ he said. CLIA Australasia will review the situation ‘in the coming period.’

There were 50 new Cruise Masters in 2019 following the intensive training course aboard Ruby Princess during a six-day round cruise from Sydney to Tasmania on November 2. This took the number of Cruise Masters in Australia and New Zealand from 320 to 370.

Scott Koepf, the US-based sales guru and motivator who has overseen every annual Masters Conference since 1999, is expected to take part again —  even if it is not seaside.