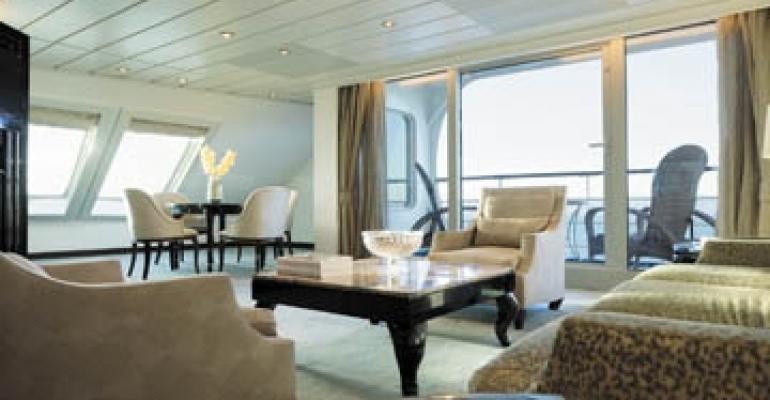 A grand suite on Seven Seas Mariner, which is operating one of the 2023 world cruises
Demand is strong for world cruises and longer voyages, and people are buying up, according to Cruise Specialists, part of Travel Leaders Group.

'There is tremendous pent-up demand in the cruise segment,' said Annie Scrivanich, SVP of Cruise Specialists, during an Internova Travel Group briefing Tuesday. 'Consumers are buying up,' upgrading to veranda cabins or suites, longer voyages and one-off itineraries.

Retirees' discretionary income is holding up, and so is pricing

The Seattle-based agency's customers are retirees and, for them, discretionary income is holding up, with the stock market performing well. Multigenerational travel is popular, too, with people making plans to reunite with extended family.

For Cruise Specialists and members of the Travel Leaders Network, the best-performing 'destinations' are world and grand cruises, then Europe with ocean cruises first followed by river, then the Caribbean, followed by the US rivers and coastal voyages. The strongest market segments are premium, followed by upper premium then luxury.

In the river segment, Europe is the strongest seller, followed by exotics (Egypt, Vietnam, India) then the US.

There are two full years of worldwide cruise departures to sell into: 2022 and 2023, with some 2024 inventory open. And Scrivanich said thousands of future cruise credits — generally valid through 2022 — have not been applied yet.

Since its 1987 founding, Cruise Specialists has sent more than 10,000 clients on world cruises. Now, for the first time in its history, the agency has world cruises available to sell over two years. Scrivanich noted two lines sold out on the day they opened bookings for their 2023 circumnavigations and another sold out last week.

'So already, one-third of the 2023 world cruise departures are sold out,' she said, adding that fares on those voyages start at $55,000 per person.