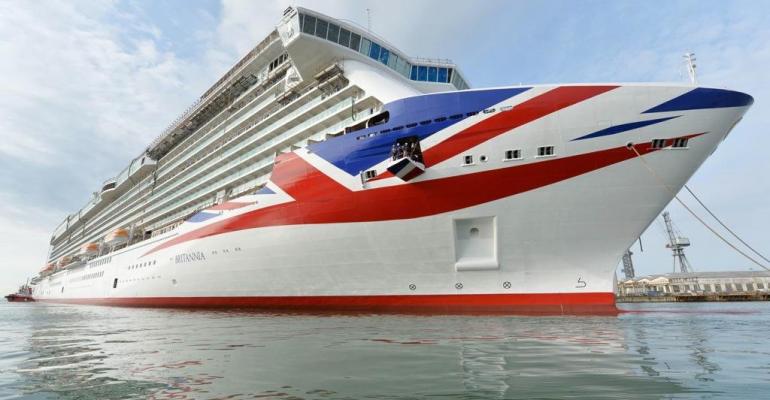 Britannia and all other P&O Cruises ships will return to Southampton, with their passengers

Keep checking back. This will be continuously updated.

Cuba is allowing Fred. Olsen's Braemar to dock so passengers can be flown back to the UK from there. Flights will depart Wednesday on British Airways.

The ship has been turned away from Caribbean ports since five people on board tested positive for coronavirus at Curaçao March 10. Twenty-two passengers and 21 crew are in isolation with influenza-like symptoms. On Sunday the Bahamas permitted two doctors and two nurses, plus food, medication and supplies, to be delivered at anchor a distance from Freeport.

P&O Cruises and Cunard Line are suspending any new cruises until April 11. P&O Cruises is bringing all its ships and passengers currently sailing back to Southampton. Likewise, for Cunard, Queen Mary 2 and Queen Victoria will return, with their passengers, to Southampton, while Queen Elizabeth's sailings in Australia are suspended.

Germany-based TUI Group suspended the vast majority of all travel operations until further notice, including TUI Cruises and Hapag-Lloyd Cruises. The executive board withdrew its 2020 financial guidance issued Feb. 11 and declared cash and available facilities of approximately €1.4bn.

For Hapag-Lloyd, cruises still running will conclude over a period until March 21. Operations are planned to restart April 18 with departures by Europa from New York, Hanseatic Inspiration from Belem, April 30 for Europa 2 from Lisbon, May 19 for Hanseatic Nature from Sao Miguel and May 23 for Bremen from Otaru.

The launch of TUI River Cruises was postponed, with all sailings canceled until and including May 2. The first revenue sailings were due to depart March 29 with itineraries on a number of European waterways.  Customers can get a full refund or re-book on other available sailings until Oct. 31. If the new cruise is more expensive, the cost will be covered; if it is less expensive, the difference will be refunded.

A-ROSA Flussschiff temporarily halted its Danube, Seine and Rhône itineraries due to restrictions imposed by the French and Austrian authorities. Rhône and Seine cruises will stop until April 15, as French authorities have banned cruise vessels with more than 100 passengers on board from calling. The Danube suspension relates to Austria's prohibition of public assemblies and will last until April 3.

Passengers may rebook on other itineraries in the 2020 and 2021 seasons and receive a €50 voucher for on-board spending. In addition, they'll get a 30% discount on a future cruise.

CroisiEurope is suspending operations through April 15. Passengers may select another departure and will receive a voucher for €150 off a future cruise.

Argentine authorities delayed the clearance of MSC Musica and Ponat's L'Austral to Buenos Aires Port, pending a detailed review of passengers' travel history. MSC Musica arrived from Brazil after embarking on a cruise from Buenos Aires March 7; most passengers are Argentines. The Ponant ship came from Patagonia and Antarctica, and is carrying mostly international passengers.