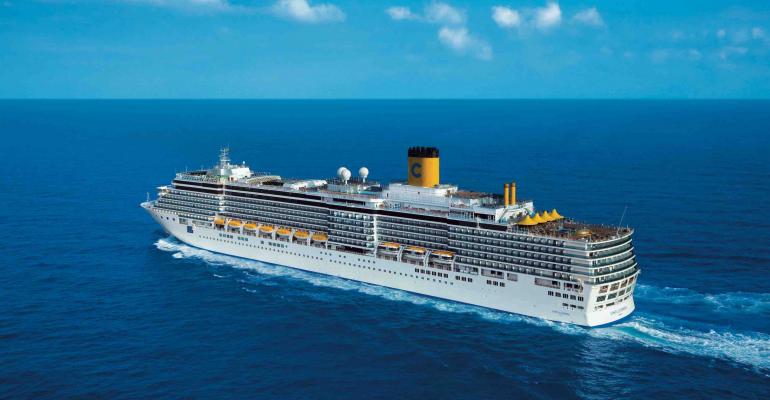 Costa Luminosa left Marseille after a slow, careful disembarkation process over two days. Next stop: Savona
In addition to feature story coverage, here's a quick read of some of today’s other coronavirus-related cruise news and announcements.

Virgin Voyages, which postponed its inaugural season for Scarlet Lady, is now giving a July 15 date for the start of sailings. The maiden voyage is set for Aug. 7.

Chantiers de l'Atlantique is extending its period of reduced activity until April 5. After closing the sheet metal and assembly workshops, as well as the cabins factory, the management decided to also close access to the ships under construction for two weeks.

Only the design offices are to remain open, with work from home or organized to limit the number of people simultaneously present.

Celebrity Apex is ready to be delivered when required by Celebrity Cruises. To comply with the French regulations against COVID-19, the crew must remain on board, and no cases have been reported from the ship.

Costa Luminosa left Marseille Friday evening after the slow, careful disembarkation process that began Thursday when the ship arrived from a trans-Atlantic crossing. Three passengers diagnosed with coronavirus left in Tenerife, and one passenger was taken to the hospital in Marseille.

The ship is heading to Savona to continue disembarkation. However, due to the heavy stresses on the Ligurian healthcare system, the Italian authorities plan to allow only healthy people off. Costa Luminosa could remain in Savona for 48 hours for disembarkation but cannot be quarantined there. It is possible — though not confirmed — that it may then proceed to Civitavecchia.

Costa Pacifica, which disembarked some passengers in Marseille on Thursday after a repositioning voyage from South America, is en route to Genoa, with arrival planned for Saturday.

Restrictions were placed on ocean and river cruise vessels in the Amsterdam region, in effect from this week. At Amsterdam, no cruise vessels are allowed to enter the port, and mooring is restricted to lay by, without passengers, until further notice.

The ports of Hoorn and Huizen are also blocking cruise vessels, while Alkmaar, Den Helder, Enkhuizen, Haarlem, Lelystad, Medemblik and Zaanstad are turning away those with 100 or more persons on board. These ports' restrictions apply until April 6.

'We understand that this decision has a huge impact on your business,' Amsterdam Cruise Port told customers, adding that the measures are 'aimed at ensuring that the port is optimally safe. Therefore, no health risk is taken by facilitating cruise ships.'

Seafarers' House at Port Everglades remains open. However, with most crew not allowed off ships, the multi-faith ministry said its ship visits are essential to seafarers' welfare including providing mail from home and wiring money to families.

'Our teams abide by ship protocols as well as our strict handwashing and sanitation policies. In many cases we are leaving goods at the bottom of gangways to avoid any contact,' Seafarers' House said. Chapel services are canceled but pastoral care counseling is available virtually and via phone.