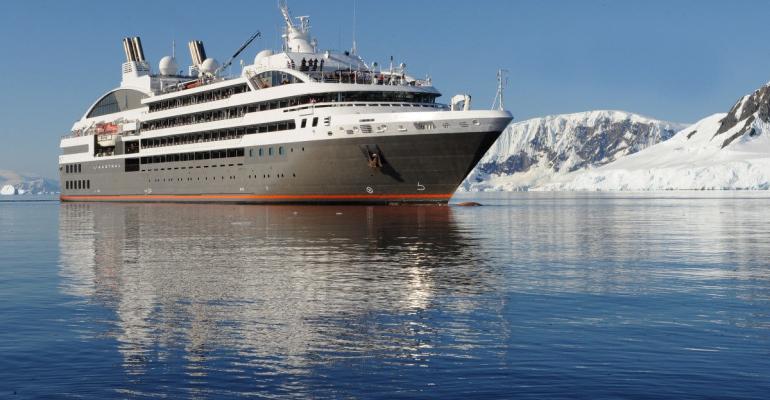 Having ended its Antarctica season, L'Austral was not permitted to dock at Montevideo so the ship is heading to Rio de Janeiro to disembark

After repatriating a total of 1,000 passengers from Le Lyrial in Cape Town, Le Láperouse in Australia, Le Bougainville in the Seychelles and Le Champlain in Martinique, Ponant is arranging flights for 900 remaining passengers on four other vessels, according to Hervé Bellaiche, chief sales and marketing officer and board member.

L'Austral and Le Boréal, ending their Antarctica season and not allowed to dock at Montevideo, Uruguay, or at Valparaíso, Chile, or Ushuaia, Argentina, respectively, are heading to Rio de Janeiro. L'Austral is to arrive March 22 and Le Boréal around March 26. Among the 900 passengers, 400 are French; 300 are from Belgium, Switzerland and other European countries; and 200 are Americans and Australians.

Ponant said there have been no suspected cases of coronavirus on any of its ships.

Costa Luminosa arrived at Savona Saturday morning from Marseille, where 721 passengers — mainly French, German, Austrian, American and Canadian — were disembarked. (The New York Times published a harrowing account of the Americans' charter flight home.) The ship came to Savona Palacrociere with 718 passengers and around 800 crew. Eighty-four people with flu-like symptoms were isolated in their rooms.

Three ambulances removed some people from the ship. In late afternoon, disembarkation began with priority for Ligurians and those living in central and northern Italy, while central-south residents were to leave Sunday morning, according to Liguria Gov. Giovanni Toti.

Passengers and crew with flu-like symptoms or positive tests for coronavirus will remain on board, and the ship will be moved to another place where there is greater availability of hospital beds, or people will be taken to a shoreside quarantine facility.

Toti reiterated Liguria cannot handle these cases by itself: 'Our region is fourth in Italy for contagions. We try to keep up and so far we have not had to choose who to treat and who not. This ship would risk being the drop that overflows the vase because we do not have enough beds for intensive care or medium intensive care to also handle passengers who need hospitalization.'

Meanwhile, Costa Pacifica arrived in Genoa, also having come from Marseille. Disembarkation began in the afternoon, starting with Russians, taken by buses to Milan Malpensa airport. Then the approximately 960 Argentines were to be transferred to Genoa airport, to three flights. Luggage was being transferred separately to load directly onto the aircraft. Procedures were strict, with all vehicles sanitized.

The disembarkation of Italians and other nationalities was to follow.

Due to the suspension of commercial flights into and out of Fiji, Blue Lagoon Cruises will now suspend all operations until May 31. The company anticipates it will resume operations on June 1.

New Orleans — no rollin' on the river

As at all other US ports, ocean cruise operations were suspended by lines, effective one week ago, at the Port of New Orleans. River cruises have also temporarily stopped.

Sailors’ Society is offering virtual chaplaincy to seafarers. The charity, which operates in 90 ports around the world including Southampton, Tilbury, Invergordon and Greenock, paused port activities for an initial period of two weeks.

Chaplains are available online and Sailors’ Society is sharing mental health advice for seafarers and setting up a special Facebook group for those concerned about the impact of the virus on their health and livelihoods. Information is here.