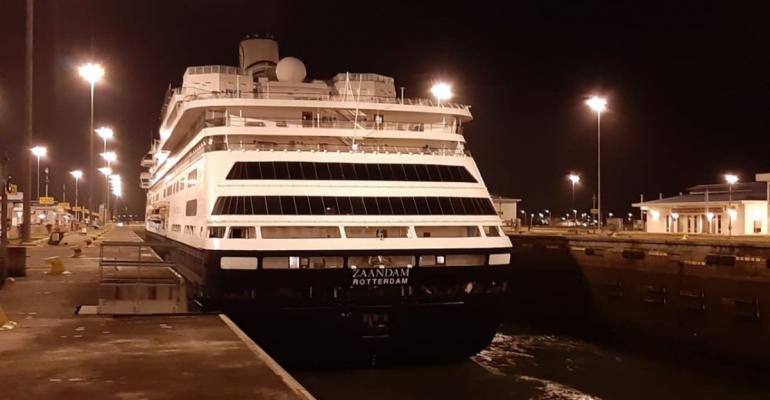 Zaandam, pictured here, transited the Panama Canal overnight, along with Rotterdam, which took on 797 passengers from Zaandam
In addition to feature story coverage, here's a quick read of some of today’s other coronavirus-related cruise news and announcements.

The Cruise Canada/New England Symposium, set for June 2-4 in Portland, Maine, is postponed until June 2021, dates to be advised. Portland will host.

Viking, the first line to announce a temporary suspension of service, extended that two months, to July 1. MSC Cruises extended through May 29, while Norwegian Cruise Line Holdings' three brands are waiting until May 10, Carnival Cruise Line unti May 11, Seabourn and Holland America Line, May 14 and Cunard, May 15.

‘This leaves a number of out-of-service ships, either at berth or at anchor or in the process of leaving Australia,’ CLIA Australasia said in its statement.

‘Cruise lines are now focused on the arrangements to repatriate crew to their homes and families and preparing their ships to be laid up with skeleton crew for the duration they are out of service.

‘Cruise lines are working with the federal government on approvals for out-of-service ships that are homeported in Australia to remain here, while it is planned that the rest of the ships will leave Australia as soon as practicably possible.’

Holland America Line's Zaandam and Rotterdam completed their Panama Canal transits overnight. Earlier, nearly 800 healthy passengers were transferred from Zaandam to Rotterdam (which was carrying only crew) in order to balance the workload on the two ships and to relieve the service staff on Zaandam, which has fewer crew working at this time.

The two ships will stay together for the rest of their journey. Passengers on both are remaining in their staterooms. Those who transferred to Rotterdam were screened and no one who had any respiratory symptoms in the last 10 days was taken, nor any crew.

Currently 73 passengers and 116 crew on Zaandam have reported influenza-like symptoms. There are 797 passengers and 645 crew on Rotterdam. Zaandam is now carrying 446 passengers and 602 crew. HAL hopes the ships can disembark at Port Everglades but approval has not been given yet.

On Monday West Australian residents on board Cruise & Maritime Voyages' Vasco da Gama, which arrived in Fremantle Friday, were transferred by ferries to Rottnest Island for self-isolation while Australians from other states were taken in coaches to hotels around Perth.

MD Australia Dean Brazier said it had taken almost five days to receive details of these passenger arrangements and that no cases of COVID-19 had been reported on board.

The ship, with 552 crew, departs Fremantle for Tilbury Monday evening.

Princess Cruises' Coral Princess, which has been heading north from Brazil since being turned away from disembarking at South American ports, is scheduled to arrive in Bridgetown, Barbados, Tuesday evening to take on provisions. No one will be permitted to get off the ship.

After that, Coral Princess will proceed directly to Port Everglades, with an estimated April 4 arrival. No COVID-19 issues have been reported on board.

Princess President Jan Swartz said Grand Princess remains anchored in San Francisco Bay, where the 14-day quarantine for crew began March 21. The line's care team continues to provide support for passengers in facilities around the US where they are staying for their quarantines.

'We just delivered thousands of care packages and are beginning to receive letters of thanks and praise for the crew, and their “above and beyond” professionalism,' Swartz said.

As for Diamond Princess, most passengers and crew have returned home from their quarantine facilities, and the extensive disinfection process of the ship has begun.

As of today, Costa Cruises has canceled 64 voyages scheduled to depart from Jan. 25 through April from China homeports and has offered a full refund or the opportunity to book a future cruise.

Impacted cruise ships have been Costa neoRomantica, sailing from Sanya, Xiamen and Wenzhou; Tianjin-based Costa Serena; and Costa Venezia and Costa Atlantica, both sailing from Shenzhen and Shanghai.

The ships are berthed or at sea near China, with upgraded sanitation protocols and free Internet access for crew. During this down-time, Costa has arranged more training for crew to help further their professional skills, service awareness and public health knowledge.

Royal Caribbean set up a 35m yuan ($4.9m) Special Fund for Tourism Revitalization and launched a series of supporting policies for tourism partners with the aim of helping restore confidence in the cruise market.