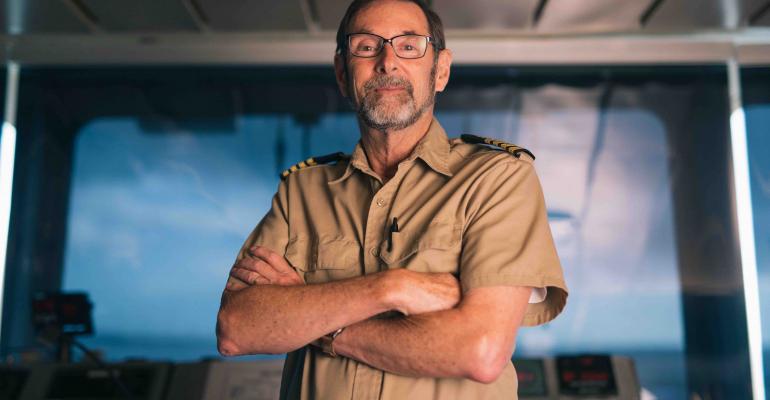 'Come experience the joy of living in an international community working together to bring hope and healing to others,' said fulltime Mercy Ships volunteer Capt. Taylor Perez

New York native Taylor Perez had a 40-year career at sea, the last 28 as a master of cable ships sailing the world. Now he's a fulltime volunteer for Mercy Ships.

Capt. Perez is currently the master of Africa Mercy, which provides free, life-changing surgeries to some of the world's neediest people. Thousands of people are helped every year.

On this International Day of the Seafarer, Mercy Ships honors Perez and seafarers everywhere, and Perez urged his fellow seafarers to consider volunteering.

Everyone on board is a volunteer

Everyone on Africa Mercy is a volunteer — from the captain to the motormen, the surgeons to the galley staff. The more than 400 volunteers come from over 40 nations.

Perez, a native of White Plains who graduated from the State University of New York Maritime College, first worked for Sanko lines on a bulk carrier and tanker while waiting for the American merchant unions to open up to new applicants.

He got a taste of the last of the era of break bulk cargo runs to the west coast of Africa and the west coast of South America. After tankers and containers, he worked for Transoceanic Cable Ship Co. (owned by AT&T at the time) and spent 31 years there, 28 as master, laying and maintaining long distance fiber-optic cable systems around the world.

Perez was introduced to Mercy Ships in 1984 when his ship stopped in Hawaii en route to Asia. The charity's previous vessel, Anastasis, was docked nearby and some of the crew invited him aboard for lunch.

'I was absolutely stunned by the quality of the crew and atmosphere on board,' Perez said. 'They were very impressive, and it was a very professional organization.'

After that meeting, Perez began to volunteer with Mercy Ships during his time off. He met his future wife on board. He has served as captain on all of the Mercy Ships fleet, and has volunteered fulltime since the end of 2016.

Perez encouraged other seafarers to consider volunteering for what he finds a very satisfying job.

Part of a community

'Normal maritime life can be kind of isolating, but here you are part of a community. There is always something happening in the evenings and weekends. I love it and I am an introvert,' Perez said.

'The ship is the hospital. You can’t have the hospital without the ship. The doctors and nurses, who do such an amazing job, could not do it without the ship. The ship can’t operate without its mariners … We don’t just need doctors and nurses, we need ratings, able seamen, motormen, engineers and professionals who can take the time to see something different and be part of something with a big impact.

'Don’t discount yourself just because you are reaching retirement,' he added 'Mercy Ships has a place for you.

'You have all the regular work you would have on a merchant ship, but you layer on top of that the fact you have far more departments and activities going on ... It is a vast floating city, but everyone has the same attitude to what they are doing.'

Perez, 69, considers himself a 'repurposed' cable ships master. His advice to other mariners: 'Don’t retire – re-fire. We need credentialed professional mariners. Come experience the joy of living in an international community working together to bring hope and healing to others.

'This is where I am supposed to be,' Perez said. 'There is no question about that.'