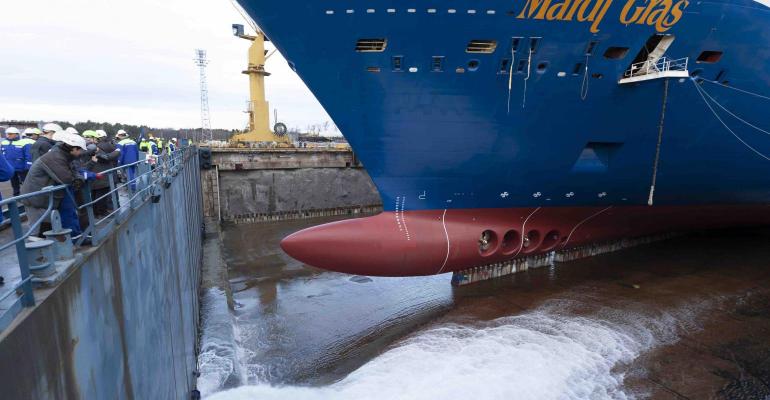 Carnival's Mardi Gras, seen here at its float-out, is due for delivery later this year
Meyer Turku shipyard plans layoffs, said future production will stick to one large cruise ship a year, not two as hoped, and posted a 2019 loss.

Talks begun about temporary layoffs in the middle of March have now moved to a deeper level with plans to permanently lay off 450 people while another 900 are affected by other measures. These include temporary layoffs of different lengths, work time adjustments and other arrangements. All personnel groups and levels are part of the negotiations.

'The corona pandemic has changed the situation unexpectedly and totally. We are facing the fact that the corona-caused pause in cruising requires stretching the orderbook. We are currently discussing the details with our customers. This new situation will force us to take painful adaptation measures to secure a sustainable future for Finnish cruise ship building and the network,' Meyer Turku CEO Jan Meyer said.

One cruise ship per year

' ... We have to adjust to that new future,' he continued. 'Instead of a further ramp-up from one to two large ships delivered per year until 2023, the estimation is now that Turku shipyard will in the future build one large cruise ship per year and not further ramp-up.'

The exact changes to the building and delivery times of the seven ships in Meyer Turku's orderbook — which reached until 2025 — are still under negotiations with customers.

Carnival Cruise Line's Mardi Gras is due for delivery this year. Costa Toscana is scheduled in 2021, Royal Caribbean International's first Icon-class ship and a Mardi Gras sister in 2022, TUI Cruises' Mein Schiff 7 in 2023, a second Icon ship in 2024 and a third in 2025.

Meyer Turku swung to a €109.7m loss in 2019 on the delay of Costa Smeralda, caused by issues ramping up to handle the size and complexity of the project. This compared to a €29m profit in 2018.