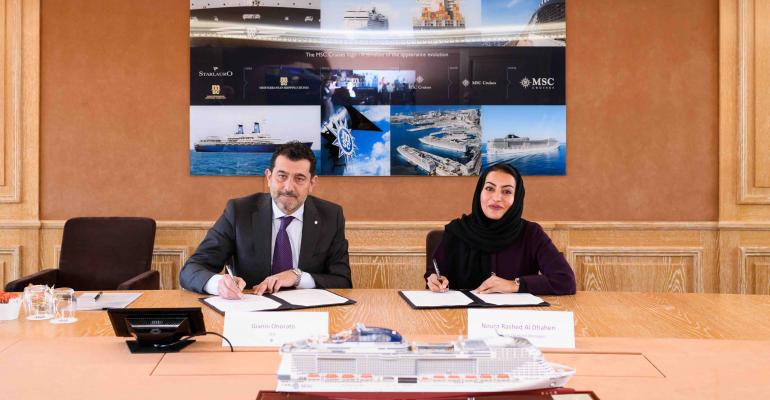 This new agreement demonstrates ‘another long-term commitment from MSC Cruises to the Gulf and it will further consolidate our position as the largest passenger cruise operator in the region,’ Onorato said.

‘Abu Dhabi is a very important embarkation port and popular destination for ashore visits during winter cruises and we are currently serving the city and Sir Bani Yas Island with both MSC Bellissima, the most modern and one of the most environmentally-advanced cruise ships to sail in the Gulf, and MSC Lirica,’ Onorato continued.

MSC Lirica will return to Abu Dhabi and the Gulf in winter 2020/21, to be joined by MSC Seaview, a ship designed to operate in warmer weather with lots of open deck space. Also in winter 2020/21, the line will send its biggest ship to the Gulf: MSC Virtuosa. This 331-meter vessel can accommodate 6,334 passengers and is due to be introduced later this year.

MSC Seaview will make its maiden call to Abu Dhabi on Dec. 6 this year, and to Sir Bani Yas Island the following day.

Abu Dhabi’s Cruise Terminal has reported significant growth in the last 12 months, posting a 47% rise in visitor numbers and 45% more calls year-on-year. This bumper year was due in part to MSC Cruises’ commitment earlier this season to include 17 new calls at Zayed Port.

The terminal marked one of its busiest days of the 2019/20 winter season in December, when it handled more than 8,000 visitors as part of a triple call to Abu Dhabi, which included MSC Bellissima’s maiden visit.

Ali Hassan Al Shaiba, acting executive director of tourism and marketing at Abu Dhabi’s Department of Culture and Tourism, added: ‘MSC Cruises was one of the key players in helping us attract over 500,000 cruise visitors to the capital last year, and we have no doubt in the successes it will bring over the coming years.’