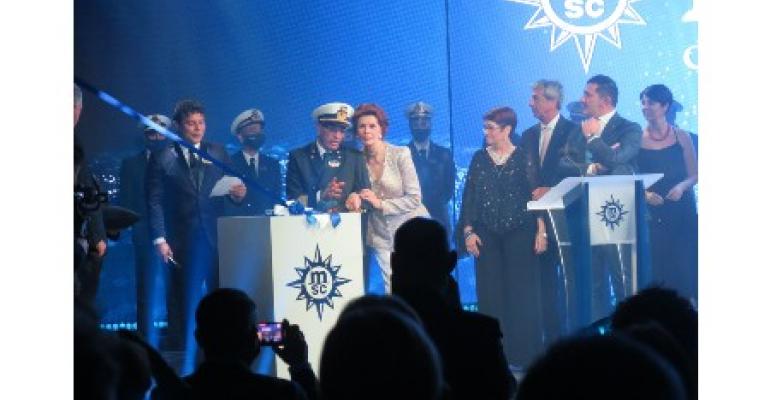 On the arm of Capt. Giuseppe Galano, Sophia Loren snips a ribbon to send a bottle of Champagne smashing against MSC Seashore's hull
Sophia Loren officially named MSC Seashore during Thursday evening festivities with the ship alongside at Ocean Cay MSC Marine Reserve.

It was the first cruise ship naming at a private island, but the 16th MSC Cruises ship christened by the iconic Loren.

On the arm of Capt. Giuseppe Galano, Loren playfully uttered 'Zoo Be Zoo Be Zoo,' a song that serenaded her when she took the stage (she'd sung it in the 1960 film 'The Millionairess'). After an audience countdown, she snipped a ribbon that sent a bottle of Champagne smashing against the bow.

The festivities for this first Seaside EVO ship gave equal billing to the accomplishments at Ocean Cay, 'a core part of our trying to be a more sustainable industry and saving our blue planet,' as MSC Cruises Executive Chairman Pierfrancesco Vago said.

Ambition to dominate in cruising as in cargo

The celebration also melded MSC's ambition to dominate in cruising just as it dominates container shipping in the US.

'We are the No. 1 cruise line in Europe, Asia, South America, South Africa, the Red Sea and the Emirates,' Vago said. 'And thanks to the support of our dear travel agent partners, we are well on our way to becoming the leading player in the world's No. 1 market: North America.'

A new ship and terminal for PortMiami

Besides the three MSC ships that are stateside now, future investments in the US market include the deployment of MSC Seashore's sister, MSC Seascape, during its inaugural winter 2022/23 season to PortMiami, and the construction of Miami's largest cruise terminal — Vago ventured to say it may be the world's largest. This will support 36,000 passenger movements in a day. Groundbreaking for the facilty is set for Dec. 13.

Miami-Dade County Commissioner Rebeca Sosa was on hand at Seashore's naming to give a rousing speech of support for everything that family-owned MSC does to 'bring happiness' to families on cruises.

MSC Foundation and a salute to pandemic heroes

The work of the MSC Foundation was highlighted, too, ranging from its support for the super coral project at Ocean Cay, hurricane relief in the Bahamas, aid to Haiti, assistance in La Palma during the volcano eruption and many other initiatives around the globe.

Medical professionals also got a standing ovation at the event for their work throughout the pandemic.

'Even the pandemic did not stop us,' he said.