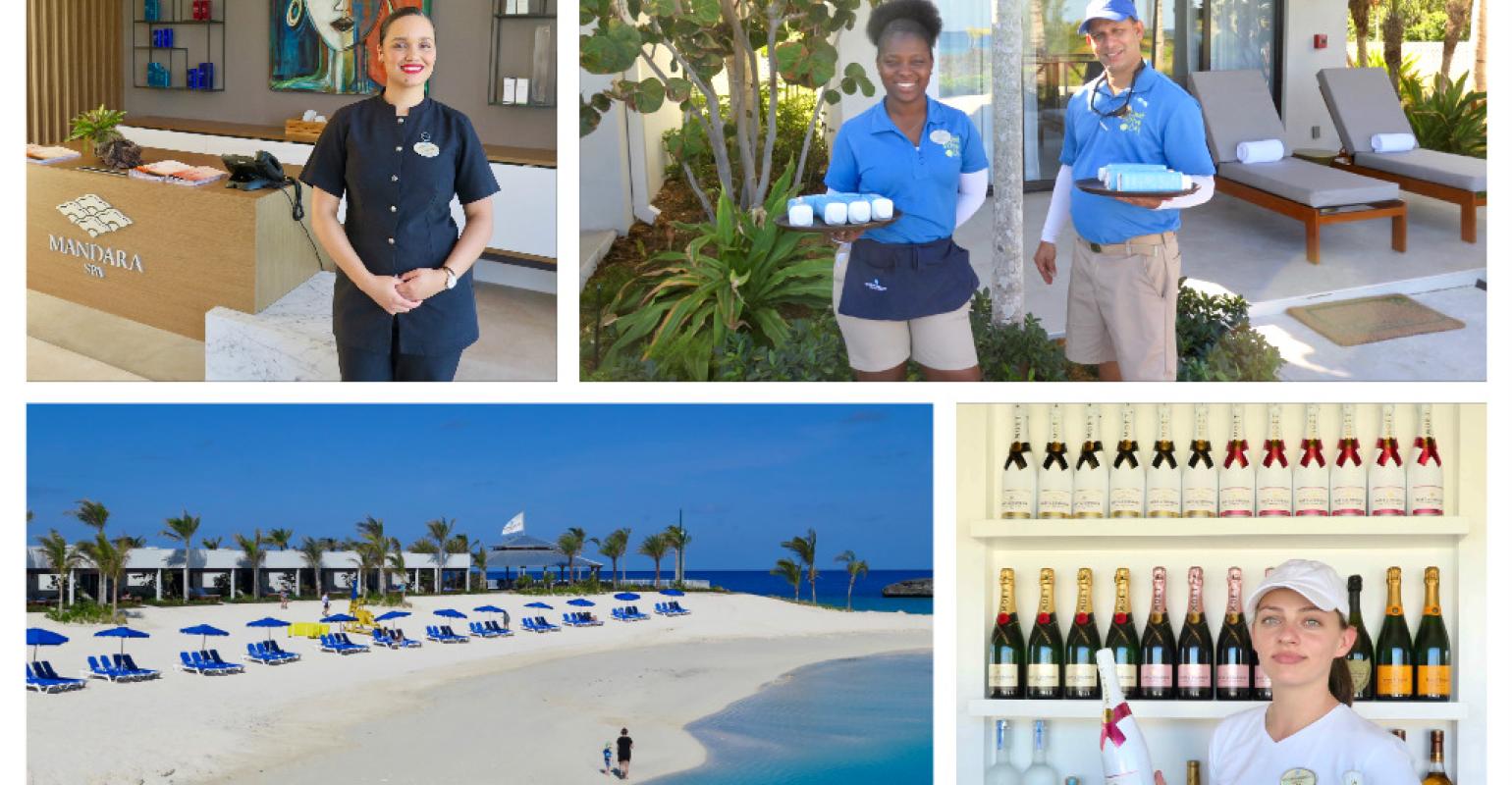 ‘We’re into delivering upscale experiences for our guests. This takes the private island experience to the next level,’ incoming NCL President and CEO Harry Sommer told travel agents at the ‘Partners First’ session aboard the newly christened Norwegian Encore before its weekend visit to cruising’s original ‘out island.’

The new Silver Cove gated area is secluded at the far end of the cay, away from the main beach. It features 38 air-conditioned beachfront villas, a Mandara Spa, a Moët & Chandon Bar and the Silver Cove Restaurant and Bar.

On island, Sommer stretched back in his villa’s living area, large enough to hold 10 people for a news conference, and offered cold drinks from the mini-fridge.

‘We are looking to going as close as possible to 100% sustainable power. We’re building wind turbines. We’ll switch from gas to electric vehicles in a few years,’ he said. In Norwegian’s quest to eliminate single-use plastics, villa attendants hand out 100% JUST Water in plant-based cartons made of mostly renewable materials.

Upon stepping from the tenders at Great Stirrup Cay, suite guests, President’s Club Latitudes members and passengers who book a villa check in at a dedicated desk and get special wristbands. They’re whisked by shuttle to the Silver Cove reception, an air-conditioned building that looks like a club in Miami’s South Beach with its plush white furniture, long white curtains and marble reception desk.

From there, they’re escorted to their Ocean Villa or, a bit further beyond, their Lagoon Villa.

The villas range from studios to larger one- and- two-bedroom units, and all are equipped a full bathroom, daybed, club chairs, TV with on-demand entertainment and outdoor patio and lounge seating. Six lagoon one-bedroom villas include an expanded living area with a wet bar and a private bedroom with king-sized bed. A pair of lagoon family suite villas have two bedrooms including a larger master bedroom with a spa tub and shower, a private dining area and an entertainment area. Art decorates the walls.

The quiet Silver Cove Lagoon is ringed in powdery sand, with plenty of space between the lounge chairs. At the far end of the lagoon, there’s a gazebo for those who prefer to relax in the shade.

Very popular over the weekend was the new Moët & Chandon Bar, featuring Moët Ice Imperial, the first Champagne created to be served over ice.

‘This Moët Ice Imperial is perfect for a sunny day on the beach. Served with strawberries, like a cocktail, it makes people happy,’ bartender Bojana said. The price is $25 per glass or $85 per bottle.

Anyone who books an appointment at the nearby Mandara Spa is entitled to dine there; it’s not limited to villa guests. The spa provides four treatment rooms with walls open to the ocean and two outdoor hot tubs. Any massage offered aboard ship is available there, according to Assistant Spa Manager Robyn, who said the aroma stone therapy treatments are the most popular choice.

Outside of Silver Cove, overlooking a neighboring beach, are open-air cabanas for up to eight ($475) or up to six ($425). A colorful food truck is a new addition there.

Also new at Great Stirrup Cay is the zip line, opened this month. It extends nearly 3,000 feet over the beach and the water.