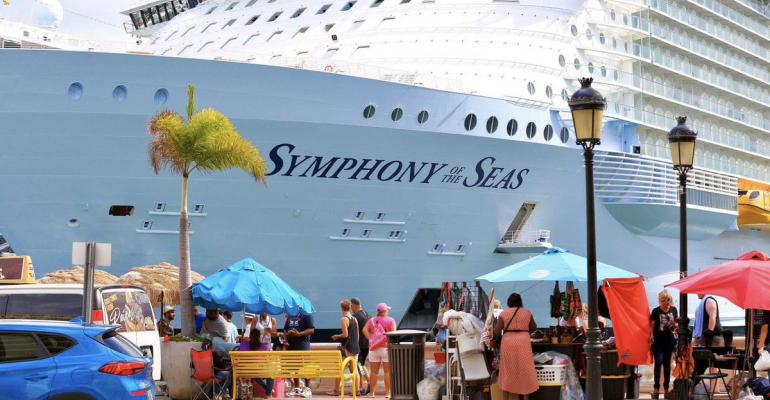 Carla Campos, executive director of the Puerto Rico Tourism Co., tweeted this photo of Symphony of the Seas in port

All the ports in Puerto Rico and the US Virgin Islands remain open until further notice, according to the US Coast Guard.

No change for Carnival or Royal Caribbean

Carla Campos, executive director of the Puerto Rico Tourism Co,, said 15,000 cruise passengers were expected, and many shops in Old San Juan are open. She tweeted a photo of Symphony of the Seas in port.

As for Carnival Cruise Line, 'There are no changes to our itineraries that call at San Juan or to sailings of our San Juan-based ship, Carnival Fascination,' spokesman Vance Gulliksen said, 'The epicenter and most damage are on the south side of the island, away from where our ships call and our guests visit. Carnival Conquest will make today’s call in San Juan and power is being restored after the grid was taken down in an abundance of caution.'

USCG has been responding to Tuesday's 6.5 magnitude earthquake and seismic activity off the south and southwest coasts.

The strong quake was centered in a region that’s been impacted by seismic activity since late December, according to the US Geological Survey.

The Port of Ponce, on the south-central coast, is only occasionally visited by cruise ships.. San Juan, the major cruise hub, is located in the island’s northeast.

News reports said electricity was out over most of Puerto Rico on Tuesday.

Port assessment teams aboard Air Station Borinquen MH-65 Dolphin helicopters were also conducting overflight assessment to identify any potential signs of pollution in the water or damage to the port infrastructure and navigable waterways.

So far no incidents of pollution have been reported to USCG.