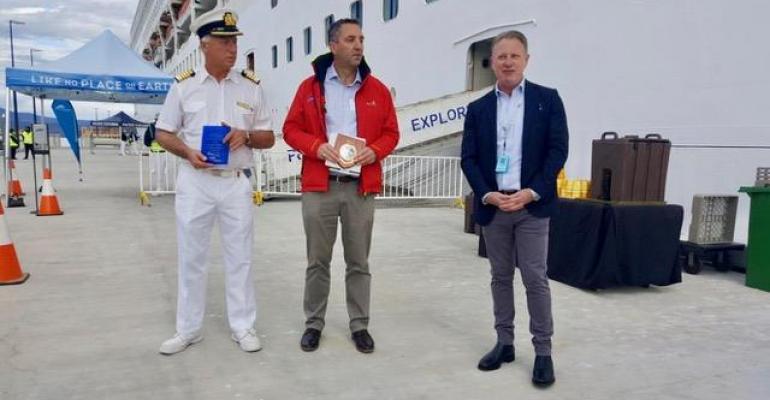 Pacific Explorer’s visit also heralded the start of the 2019/20 season for Eden, the southernmost deepwater harbour in New South Wales, situated on the Sapphire Coast between Sydney and Melbourne. Holland America Line’s Maasdam follows on September 27 and Caledonian Sky on November 1.

The wharf extension allows ships of up to 325 metres to berth in Snug Cove instead of tendering passengers ashore.

She said future P&O cruises scheduled to ‘nowhere’ will also include calls at the port where a ‘Taste of Eden Festival’ of local produce, seafood and wine awaits passengers.

Those arriving on the maiden berthing Sunday were welcomed by flag-waving pupils from Eden Public School and volunteers from Cruise Eden.

Philip Holliday, chief operating officer - Sydney, Port Kembla, Eden & harbour master Sydney, one of the VIP guests, said the Eden cruise wharf is a welcome addition to ensuring the south coast region of NSW is safe, open and accessible to the cruise ship industry and the economic benefits the industry will bring.

Holliday said 22 cruise ship visits are forecasted for the current season, with many more to come in the future, including Cunard’s Queen Elizabeth in the 2020/21 season.

The wharf extension was jointly funded with A$10m from the federal government, A$32m from the NSW government and A$2m from Bega Valley Shire Council.