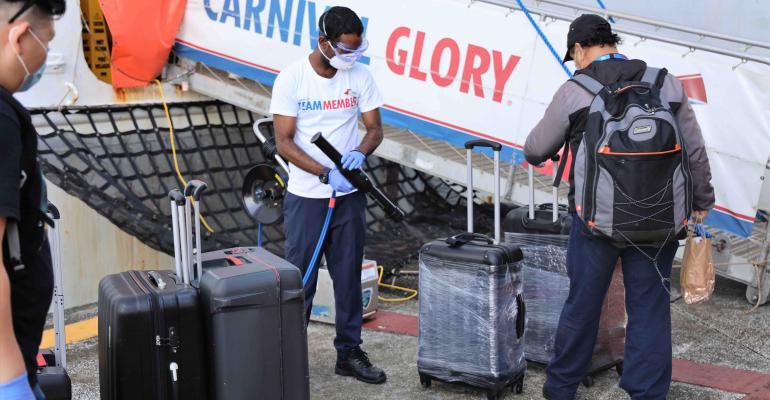 Crew transferred from other ships to Carnival Glory at Colón 2000. It carried them to Curaçao for repatriation from there

Panama has made the first 'isthmic transfer,' moving Carnival Cruise Line crew from one ship to another to facilitate their repatriation.

About 91 crew from Carnival Miracle in the Pacific sector were transferred by bus to the Colón 2000 terminal in the Atlantic sector, where they later boarded Carnival Glory to sail to Curaçao for repatriation to their countries of origin.

The transfer inspection was carried out by Panama Maritime Authority Administrator Noriel Arauz.

‘The crew members are healthy and, since their entry in Panamanian waters at the beginning of May, they have been monitored daily by the on-board doctors, supervised by Panama’s Ministry of Health in coordination with the Panama Maritime Authority and the National Immigration Service and in compliance with strict biosafety protocols, without putting at risk the sanitary integrity of the country,' Arauz said.

'We are providing a humanitarian and effective response to seafarers from 25 nations — among them, Philippines, India, Indonesia, Myanmar, Nicaragua, Haiti — who arrived in Panama waters on the ships Carnival Miracle, Carnival Inspiration and Carnival Imagination ... from the US West Coast,' he said.

Carnival Cruise Line had previously conducted ship-to-ship transfers of the crew members, grouped by nationality, to carry out the repatriations.

June 15 update: Carnival President Christine Duffy thanked Panamanian officials for going 'above and beyond in helping our team members transit their country and to facilitate their return home and for that we are very grateful.'

As of this week, Carnival said it has repatriated nearly 20,000 crew from its 27 ships and expects to get the more than 26,000 remaining home to 100-plus nations over the coming weeks.