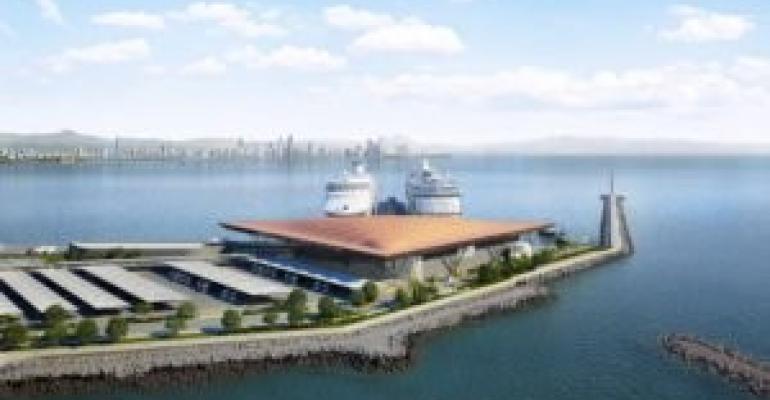 The new Panama Cruise Terminal is designed to handle two large ships up to 380 meters/1,247 feet each at a finger pier. It is now expected to be operational in August 2020
Panama will reimburse Norwegian Cruise Line for the cost of Canal transits over three years, up to a total of $18m, in exchange for operating turnarounds in the country.

NCL has become the first cruise line to benefit from Panama’s incentive to encourage homeporting.

Panama Tourism Authority Administrator Iván Eskildsen on Tuesday said the government approved an agreement to reimburse NCL for its Canal transits in 2021, 2022 and 2023, up to an annual sum of $6m, for a total of up to $18m.

‘This is very good news for the tourism business,’ Eskildsen said. Passengers will fly in and out of Tocumen International Airport, entailing a two-day stay in the country resulting in a total economic impact of $12.8m per turnaround. NCL, he added, has agreed to provision while in Panama.

An NCL spokeswoman said the company is ‘exploring opportunities with Panamanian authorities’ but had nothing to share at this stage.

Seatrade Cruise News understands open-jaw itineraries are likely that would have passengers embarking at Panama City and possibly visiting Costa Rica or Colombia, then transiting the Canal and disembarking at Colón, where new passengers embark for the reverse route. According to Panama officials, sailings would commence in March 2021.

In other developments, the new cruise facility at Panama City is now scheduled to be ready in August 2020, and the government canceled the previously announced tender to operate it.

The tender, published by the prior administration in April, outlined terms for the operation and maintenance of the new facilty at Perico Island off the Amador Causeway, a contract valued at $9m.

The tender will be revised, and the Panama Maritime Authority hopes it will be reissued this month.

The new Panama Cruise Terminal is designed to handle two large ships up to 380 meters/1,247 feet each at a finger pier. The prior government had expected transit calls to begin before the end of 2019, with an eye to homeport operations starting in 2021.