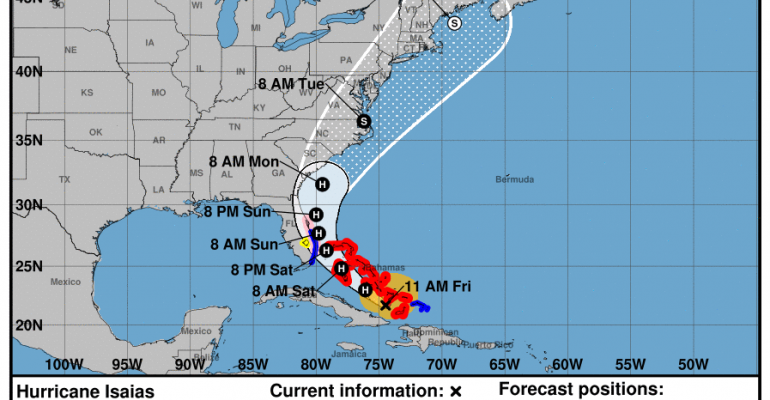 Ports in the Bahamas and Florida have been battening down and cruise ships are heading from their anchorages out to sea as Hurricane Isaias advances.

Isaias, a Category 1 hurricane, was expected to strengthen into Category 2.

Hurricane warning for the Bahamas

On Friday a hurricane warning was in effect for the northwestern Bahamas including Andros Island, New Providence, Eleuthera, Abacos Islands, Berry Islands, Grand Bahama Island and Bimini. Besides the cruise ports of Nassau (New Providence) and Freeport (Grand Bahama Island) as well as Grand Bahama Shipyard, encompassed in this swath are a number of cruise line private islands and destination developments.

The Turks and Caicos are under a tropical storm warning.

Cruise lines with laid-up ships in the area told Seatrade Cruise News those vessels have gone or are going out to sea. For Carnival Cruise Line, that is about half a dozen ships that have been anchored in the Bahamas.

A Royal Caribbean Group spokesman said his company's vessels would be sheltering southwest of Cuba.

Holland America Line currently has no ships in the area — they're in Asia, Europe or off the west coast of Mexico.

The Coast Guard captains of the port on Friday morning set conditions Yankee (24 hours to possible hurricane-force winds) for PortMiami and Port Everglades and X-ray (48 hours) for Port Canaveral. Tampa on the Gulf Coast went to X-ray on Thursday afternoon.

At Port Canaveral, where the workforce has been reduced nearly 50% due to COVID-19 cutbacks, few cruise ships have been sheltering at this time so the storm's approach hasn't made much of a difference, a spokesman said.

Interests along the entire US East Coast were being advised to monitor the progress of Isaias.