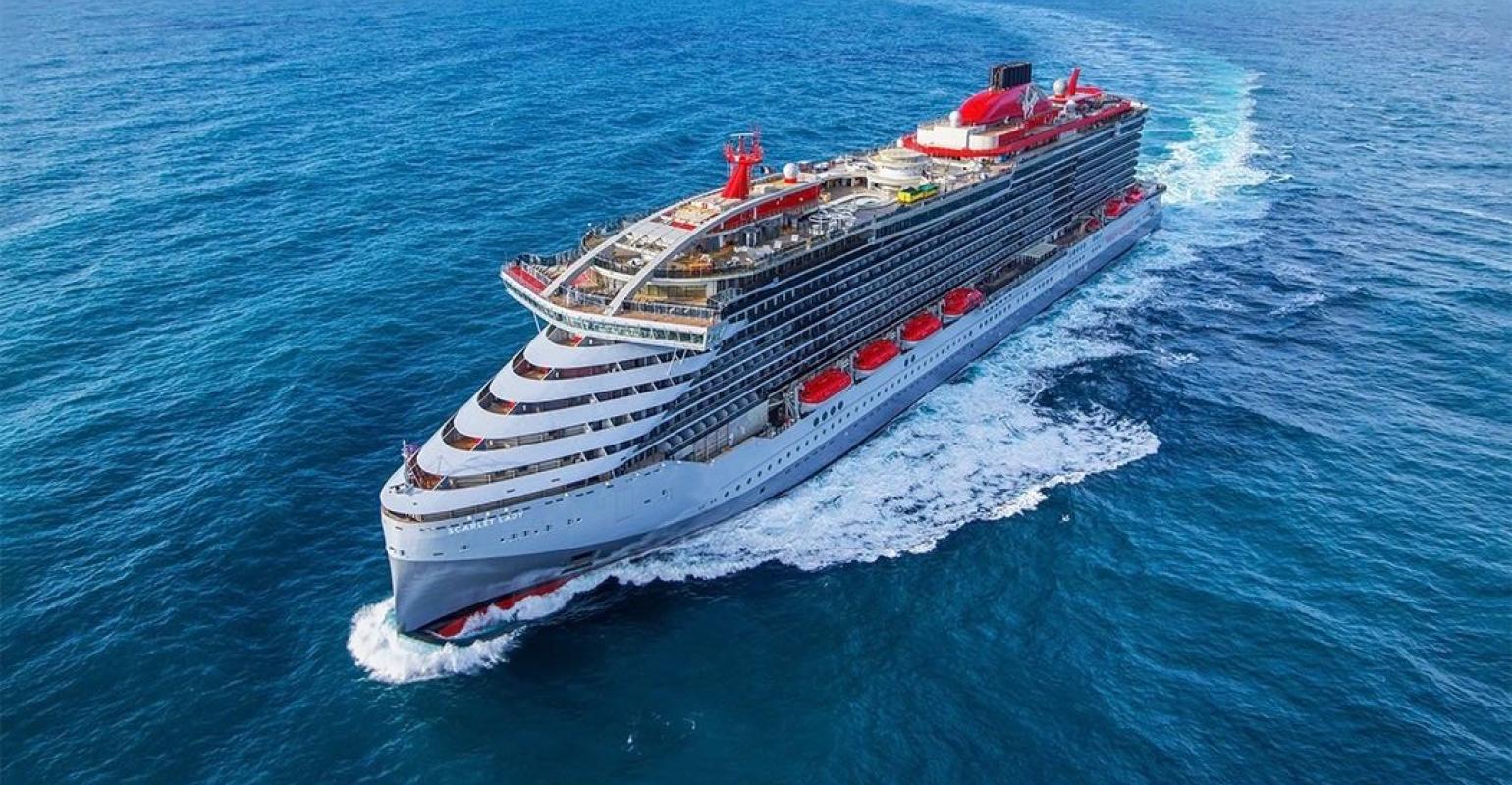 Scarlet Lady is on show to first mates (travel advisors), media and VIPs in Dover today

The aim, said Branson, is to reinvigorate the cruise industry in the same way Virgin Atlantic Upper Class did for aviation.

Scarlet Lady abounds with curated experiences and design-led spaces with interiors created by designers such as Tom Dixon and Roman and Williams.

There is a strong focus on well-being with a host of ‘Vitamin Sea’ offerings such as B-Complex gym programs to balance, build, burn and bike, as well as The Perch, designed for outdoor yoga.

With a focus on experiential dining, Scarlet Lady offers more than 20 eateries, including vegetarian-forward cuisine (Razzle Dazzle), experiential creations (Test Kitchen) and concepts by chefs like the Michelin starred Brad Farmerie (of PUBLIC in NYC) and Sohui Kim (of Insa in Brooklyn.)

All dining experiences, group workout classes, basic beverages (soft drinks, coffee and water), gratuities and Wi-Fi are included in the base cruise fare, regardless of room category.

Entertainment and shows on board feature gigs, DJ sets and drag artists, to name a few.

The ship will also host special On Deck voyages with DJs such as Mark Ronson, Diplo, MK and Sofi Tukker, providing up-close and personal appearances at its own private spot, The Bimini Beach Club.

Branson, Virgin Group founder, commented: ‘I have dreamed of starting my own cruise line since I was in my 20s and I’m thrilled that moment has arrived. The Scarlet Lady is truly special and we’ve worked with some of the world’s most sought-after designers, artists and architects to craft an extraordinary experience. The benefit of our five decades in business in so many industries is that we can offer a voyage like no other.’

Virgin Voyages is using Climeon, a technology that recovers heat generated from the ship’s engines to generate electricity, thereby decreasing the demand for fuel.

The company is also purchasing offsets so Scarlet Lady enters service carbon neutral, while also supporting a long-term strategy that secures a net-zero future for the cruise industry.

Scarlet Lady set sail from Genoa last week where she was built at the Fincantieri shipyard. After a Dover overnight showcase to first mates (travel advisors), media and VIPs, the ship continues for a repeat event in Liverpool this weekend before sailing for the US.

From homeport Port Miami Scarlet Lady will sail to Costa Maya in Mexico, Puerto Plata in the Dominican Republic, Key West and the Bahamas. The ship will later be joined by sister Valiant Lady which features seven-night Mediterranean itineraries out of Barcelona when she debuts in May 2021.

Check back for a firsthand report from Seatrade Cruise News, on board in Dover today.