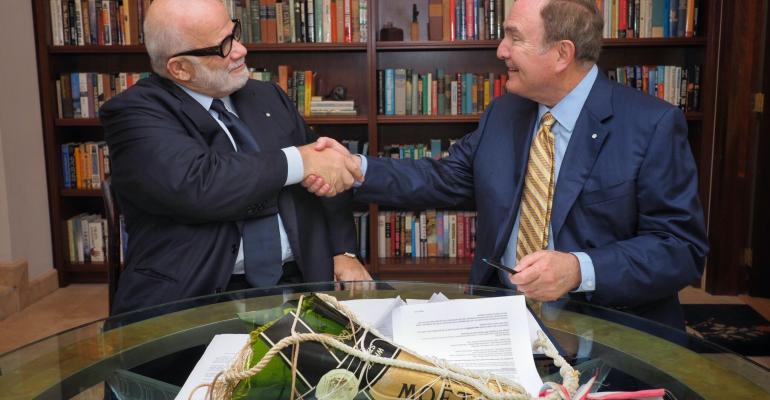 In 2018, Manfredi Lefebvre, left, and Richard Fain shook on Royal Caribbean's acquisition of a two-thirds stake in Silversea

Manfredi Lefebvre d'Ovidio, who took over Silversea from his late father, will serve as chairman, and Roberto Martinoli will remain president and CEO.

'Silversea has been a great fit for our company from the very first day,' Royal Caribbean Group Chairman and CEO Richard Fain said. 'The cultures of the two organizations have proven to be harmonious, and guests have responded favorably to the combination.'

The remaining one-third stake held by Lefebvre's Heritage Cruise Holding Ltd. was paid for in the form of 5.2m shares of Royal Caribbean Group common stock, which represents about 2.5% of the total common stock. As of Thursday's RCL closing price, those shares would be valued at about $245m.

'Manfredi and Roberto have brought a fresh point of view to our company, as well as deep knowledge of their brand's unique audience,' Fain continued. 'Their skills – and Manfredi's inimitable style – will continue to play an important role in growing Silversea into the future.'

Combination 'everything I hoped for'

Said Lefebvre: 'The combination of our companies has been everything I hoped for. The skills and resources of Royal Caribbean Group have helped us grow and flourish. We share a vision about the bright future of cruising, and I look forward to being a shareholder in the broader Royal Caribbean Group.'

Added Martinoli: 'Thanks to the incredible resources and skills of Royal Caribbean Group, Silversea will grow and thrive. Today marks another key step in our drive to uncontested leadership in ultra-luxury and expedition cruising.'

Immediately following Royal Caribbean's initial stake in Silversea, the Project Invictus program of product enhancements and ship upgrades was announced. That was followed by orders for an expedition ship (Silver Origin, recently delivered) and a pair of luxury vessels in a new Evolution class.

Two months ago, in a business update, Silversea officials confirmed the full newbuild program, which includes the previously ordered Silver Moon, due this year, and Silver Dawn.