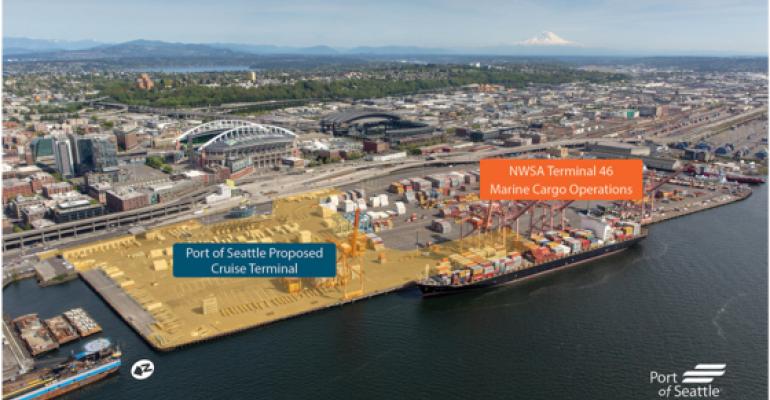 Terminal 46 is shown here, with the site of the proposed cruise facility in blue

The Port of Seattle released a revised request for proposals for a new cruise facility at Terminal 46 with additional environmental elements.

The updated RFP went to shortlisted proposers being evaluated as potential investment and operating partners. The estimated $200m facility would entail a $100m investment from the port and the balance from a partner.

The updated RFP includes new language requiring cruise ships to be equipped with shore power and connect while at berth. In addition, the port specified practices to require cargo handling equipment to have zero tail-pipe emissions, to further participate in regional air quality planning, to protect water quality by prohibiting discharges and to build sustainably.

‘A key element of the port’s clean air and climate change strategy is to ultimately have all vessels utilizing shore power at berth,’ said Stephanie Jones Stebbins, managing director of the Maritime Division at the Port of Seattle. ‘The port intends to require 100% of homeport cruise vessel calls at the new terminal to be shore-power capable and plug in starting the first year of operation.

‘We are striving to be the cleanest and greenest homeport in the nation,’ she added.

Cruise ships have been using shore power in Seattle since 2005.

Responses to frequently asked questions about the proposed cruise facility were posted today, too.

The scoping document will help the port establish the areas of investigation included in the EIS. The report contains a detailed discussion of the EIS scoping process, a summary of the comments received during the scoping comment period and copies of all correspondence received.

Partner could be announced in Q2

The port could potentially announce its cruise facility investment and operating partner in the second quarter of 2020.

Then a draft EIS publication, public comment period, public meetings and online open house would take place in the second and third quarters. After that, the schedule envisions final EIS publication and the port commission’s consideration of the lease during the second half of the year.

The timeline targets second quarter 2023 for the opening of the facility at Terminal 46.