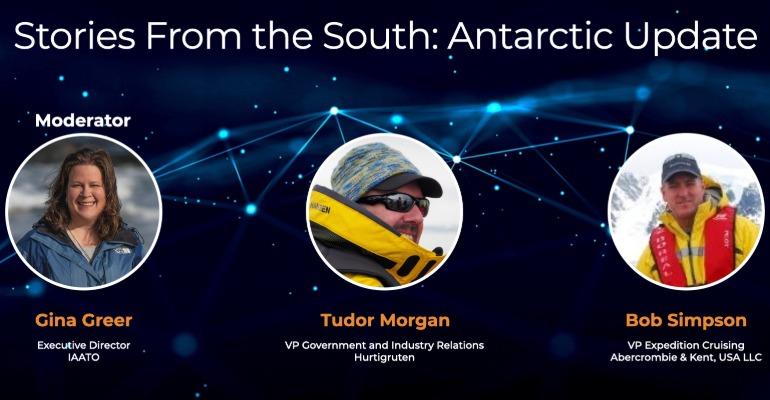 The cooperation that exists between operators in the region is unseen elsewhere, according to Greer, Morgan and Simpson

Dedication to science, while providing passengers with unique opportunities to learn about the remotest landscapes on Earth, makes cruising to Antarctica unique, according to Tudor Morgan, vp government and industry relations, Hurtigruten and Bob Simpson, vp expedition cruising, Abercrombie & Kent USA - but challenges lie ahead.

‘With more operators, in terms of planning and guests' wilderness experiences there has to be a lot more stringent planning,’ explained Morgan, who says the ‘sheer volume’ of new vessels in the region coupled with ‘a limited number of landing sites’ is driving Hurtigruten to seek new territories deeper in to Antarctica.

‘Two years ago you wouldn’t see another ship… A big challenge is how to fit the number of operators in those areas. We’ve invested in hulls of our ships, so we can go further south and expand our areas of operation and get away from the main tracks.’

But doing so can prove costly, ‘Expedition teams are getting bigger and bigger, but to train somebody in Antarctica expedition cruise travel, you have to go to Antarctica. The standards that we need to keep those guests experiences and that safety is [therefore] a challenge in that we need to invest in a lot of training for staff… It’s a big cost.’

The discussion came during the first day of Seatrade Cruise Virtual Expedition Cruising amid the ‘Stories From The South: Antarctic Update’ session, moderated by Gina Greer, executive director, The International Association of Antarctica Tour Operators (IAATO.)

‘It’s really important as operators that we deliver trips that have a sense of purpose and meaning when we go to Antarctica,’ commented Morgan, ‘For research vessels to go to these areas is tricky, it’s expensive and they can only be there for a short period of time… We dedicate a cabin for guest scientists on every trip.’

He added, ‘We have a chief scientist who programmes our science support and different projects, whether it be marine mammal observations, whale tagging, work with penguins, work with phytoplankton.

‘Those scientists, when they’re on board, provide added value to the guest experience… they’re there explaining to the guests what they’re doing. In the evening, around the bar or in the lecture theatre, they’re explaining what they’ve found…. It really fires the imagination of the guests.’

In outlining the importance of citizen scientists on board Hurtigruten vessels, Morgan went on to add that photographs taken by passengers of whale tales - which have unique identifying patterns - helps scientists monitor the animals’ movements.

Wax skeletons of various other mammals found in the region can also be viewed on board the vessels in order to develop passengers’ understanding of the wildlife they encounter.

‘We try to engage our guests in as many different projects as possible,’ continued Morgan. ‘We’ve fitted our ships with science centres so we have a suite of microscopes where we can look at the microworld: water samples, krill…’

Likewise, Abercrombie & Kent began delivering conservation projects in the region 15 years ago and continues working with scientists and expedition leaders on projects like Save The Albatross.

While Morgan referred to the Association as ‘Our ticket to operate in these fragile areas,’ Simpson remarked that being a member of IAATO makes abiding by the Antarctic Treaty more straightforward and makes ‘planning and operations easier.’

‘[It’s] part of an obligation’ expressed Simpson, ‘It’s so important… that our interests are represented and that we’re involved in some of that process.’

Continued Morgan, ‘You’re so remote [and] under the Antarctic Treaty we have to be self sufficient, so when we leave we have to think of everything, if there’s a spare part missing, you’re not going anywhere.

‘The weakest link is the thing that trips you up and that’s where collaboration with operators really comes into play. It’s a really special place… where we all work together.’

Greer also touched on the sense of camaraderie that exists in the Antarctic, ‘It really is a community and I think sometimes people miss that when they think of the competition in the region,’ she stated.

So said Simpson, ‘Competitors, all by necessity, have to work together in order for all this to work...I don’t think there’s another section of the industry that has that dynamic.’