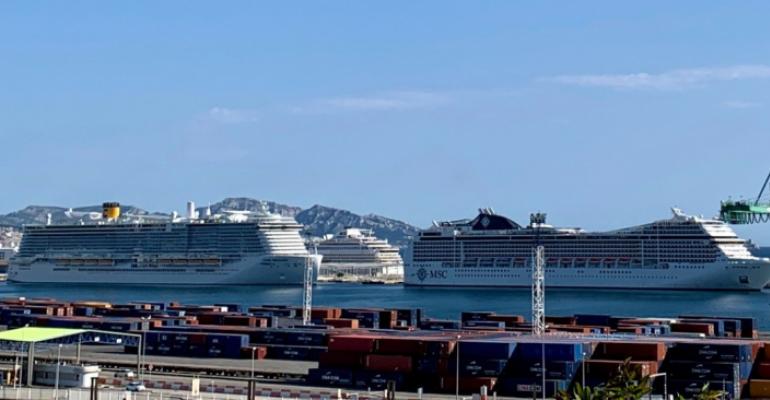 Cruise ships in waiting at Marseille

Marseille — which has hosted more than 30 private yachts and cruise ships simultaneously during the COVID-19 pandemic, for lay-up or refits — is ready for cruise operations to resume.

'The port ecosystem, agents, airport, etc., all are ready' and updated sanitation protocols are in place, a Marseille Provence Cruise Club spokesperson said.

Ponant ready to roll out

As soon as authorized by the French government, Ponant's L'Austral will embark on the first of 14 planned cruises using Marseille as turnaround port to explore the Côte d'Azur (Camargue, Estérel coast, Hyères Islands and the Saint-Tropez Peninsula).

Costa and MSC, the leading cruise companies in France — which in 2009 teamed on the Marseille Provence Cruise Terminal — hope to restart cruising sometime in August. No other company is currently scheduled.

Before COVID-19, Marseille had targeted 2m cruise passengers in 2020.

On May 21, the 10 cruise ships already present were joined by Norwegian Getaway, docked at the Chantiers Navals near Norwegian Breakaway, both there for refits. A newcomer, Silver Spirit, which left Southampton where it was repatriating crew, is to arrive early Friday morning, probably docking behind Silver Shadow. Along with Silver Wind, Whisper and Shadow, the ship will be laid up until cruises resume.

As previously reported, thanks to a close coordination organized by the Marseille Provence Cruise Club with local authorities, several cruise lines stepped up to donate surplus food and supplies to local charities over the past months.

With the help of the Marseille Firefighters Sailors, port customs, the Bouches du Rhône Prefecture and the Cruise Club that connected the stakeholders, MSC and Costa were the first to organize several tons of surplus food donations in April and May, followed by the Marseille-based Ponant. Ponant also recently gave some 130 cubic meters of furniture in good condition to the local Règie Service 13 Association. Coming from L'Austral, the furniture included chairs, tables, cushions, blankets and bedsheets.

Earlier in the pandemic, cruise passengers were disembarked at Marseille and sent home on chartered buses or flights. Crew remaining on board have been offered different types of services by the Seamen's Club.