Silver Moon is named in festivities that also salute Greece 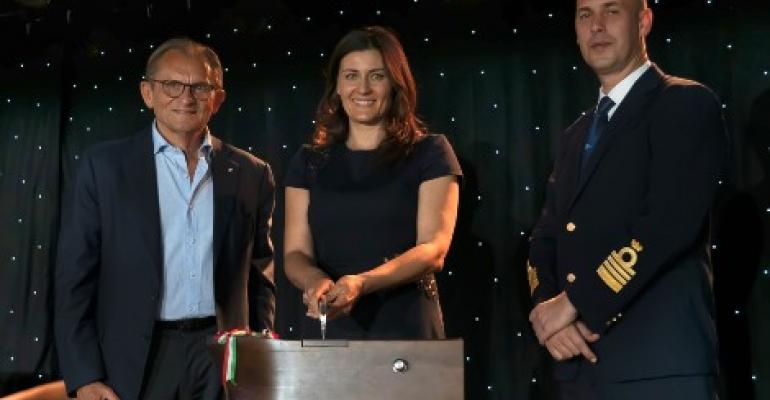 Godmother Gaia Gaja chops the cord to send a bottle of Champagne smashing on Silver Moon's hull. With her are Roberto Martinoli, left, and Capt. Chavdar Georgiev

Silver Moon's naming in Greece today symbolized 'not only the birth of a new vessel but the rebirth of cruising,' Royal Caribbean Group Chairman and CEO Richard Fain said.

'Cruising from Greece is a wonderful place to start ... It is very emotional to be here,' he added.

Fain credited the Greek government and Tourism Minister Haris Theocharis for their leadership in getting cruising going again. This included facilitating the vaccination of cruise ship crews.

For his part, Theocharis said that supporting the industry during last year's shutdown helped pave the way for the 2021 resumption. Forty cruise ships are booked and this is the first year since 1971 that there are more homeporting than transit calls.

The festivities alongside at Piraeus in Silver Moon's main lounge opened with pipers and a drummer in a nod to parent Royal Caribbean Group.

'Before we purchased Silversea, Richard [Fain] and I were drooling, salivating over this incredible brand and business for many years,' EVP/CFO Jason Liberty told the audience. 'We recognized that Silversea was a clear leader in the ultra-luxury and expedition space and a perfect complement to our family.'

'... As the CFO, seeing paying passengers after 17 months is fantastic,' he added.

Liberty called Silversea the group's 'crown jewel,' and Fain acknowledged former owner Manfredi Lefebvre d'Ovidio for his vision in developing the brand and President/CEO Roberto Martinoli and his team for leading the company so well.

Credit to Giacomo Mortola and Fincantieri

Martinoli credited Silver Moon interior architect Giacomo Mortola for his work and Fincantieri for the 'incredible' accomplishment of being able to deliver the ship during the pandemic — it was handed over last October and finally able to enter service June 18.

Silver Moon's main distinction is its dedicated facilities for the line's new culinary immersion program, Sea and Land Taste, or S.A.L.T., and Martinoli said he, Fain and Liberty had fun cooking together in the S.A.L.T. Lab the night before. (They prepared carmelized fig.)

Godmother Gaia Gaja, a fifth-generation Italian winemaker hailed by Martinoli as the 'Queen of Barbarasco,' chopped a cord that sent a bottle of Champagne smashing against Silver Moon's hull.

She quipped: 'Tomorrow I'm changing my business card to Gaia Gaja, queen of Barbaresco and godmother of Silver Moon.'