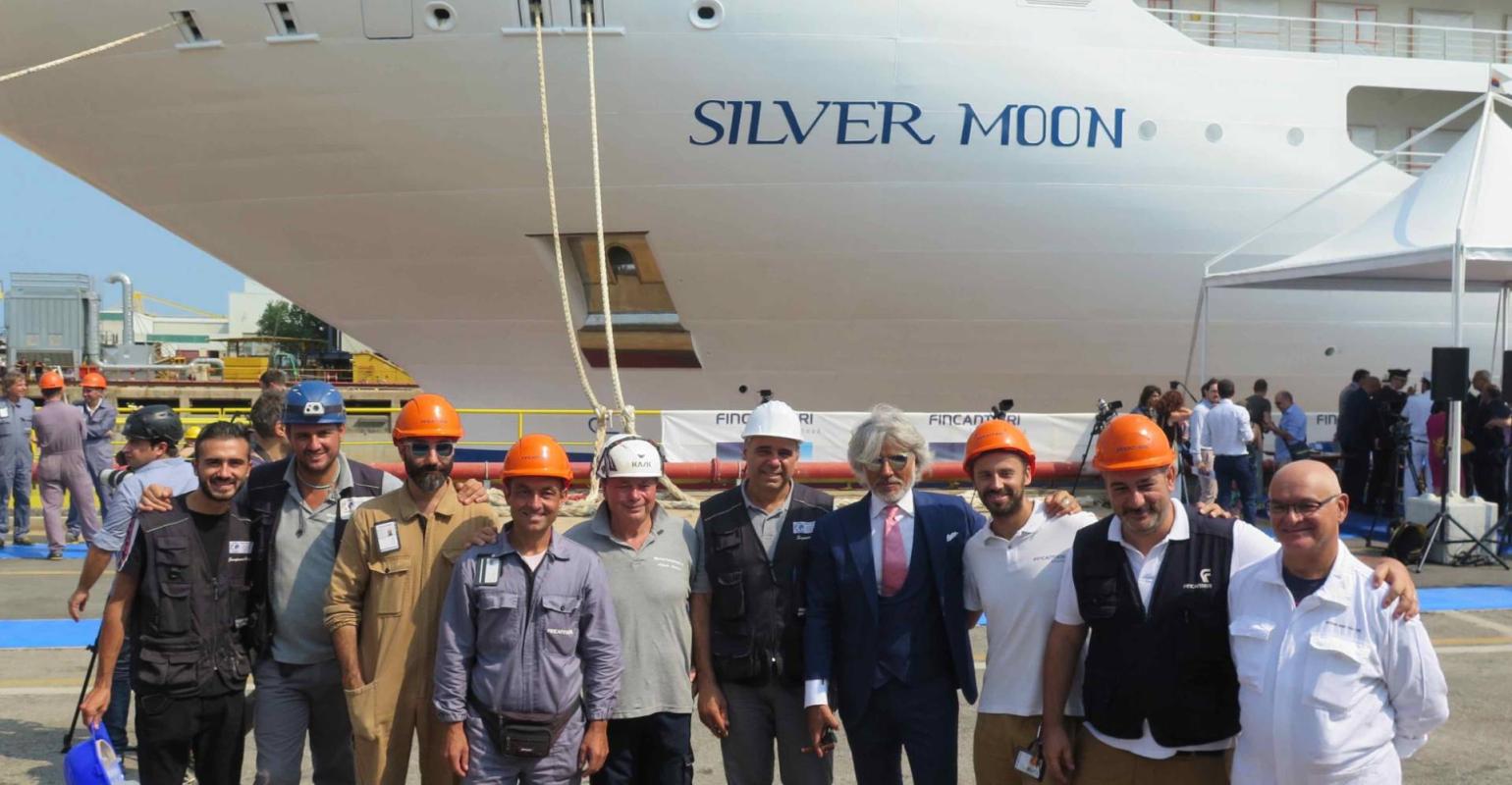 PHOTO: ANNE KALOSH
Workers at the float-out of Silver Moon in 2019. The ship's delivery is now delayed by some weeks

During these unsettling times, Silversea Cruises' board gave a vote of confidence to the future by confirming its five-ship newbuild program.

Management also said numbers 'turned from red to black' with a double-bonus booking promotion and shared insights into customer attitudes, and who's booking what.

'When this first began, people were panicked,' Mark Conroy, managing director, the Americas, said of the COVID-19 pandemic. 'Our customers hate uncertainty.'

Cancellations escalated, even for late-year sailings.

On top of that Silversea unleashed a double-bonus offer: a reduced deposit of $1,000, on-board credit of $1,000 and an additional 10% discount for booking by June 20.

'The day we launched this promotion, our CEO said the numbers magically turned from red to black,' according to Barbara Muckermann, chief marketing officer. She said that shows people just needed a nudge, adding: 'We are hopeful this is the beginning of a recovery.'

Muckermann also reported many people who sought refunds booked another cruise when they got the money, leaving Silversea's CFO puzzling why they didn't just take a future cruise credit?

There's a correlation between age and who opts for the FCC: The older they are, the more they choose the credit. 'These are real travelers,' Muckermann said. 'The biggest pandemic of the century is not going to keep them from traveling,'

Dutch shipyard De Hoop pulled out all the stops to safely work through the shutdown and surprised Silversea by its readiness to deliver Silver Origin. That was 'totally unexpected' given the situation, Muckermann said.

The nearly finished ship now sits in Rotterdam, awaiting its furniture and artwork from Italy, where the factories have been closed. Because of this, the July 15 inaugural Galápagos cruise was canceled but it is hoped service can start Aug. 22.

After delivery, Silver Origin will cross Atlantic, refuel in the Caribbean, transit the Panama Canal and continue to Manta, Ecuador, for a two-week offshore quarantine before going alongside. There, paperwork will be completed to change the flag from Bahamas to Ecuador.

Currently, Ecuador is closed 'but we are very confident that by mid-June, airports will be operating and ports opened,' said Fernando Delgado, VP Canodros/Silversea Cruises Ecuador.

Silver Moon is delayed at Ancona, after all Italian shipyards and production plants were closed March 16. Work is gradually resuming. Fincantieri hasn't confirmed a new delivery date so Silversea canceled the first sailings, until Oct. 2, for now.

Most people whose cruises have been canceled are rebooking a similar itinerary and date the following year.

Muckermann said Silversea's typical age range is 61 to 80, but that's skewing older for those rebooking. 'It's a little counterintuitive,' she said. 'Baby boomers and the silent generation are really the travelers who want to go back first.'

Expeditions are preferred, which may play into a desire to avoid crowded places, but also for bucket list destinations. Antarctica is selling 'really well.' The Mediterranean is doing well.

The Galápagos have had the least number of cancellations, followed by Antarctica. Arctic sailings are booking for next summer, and there's demand from Europeans for British Isles cruises from London Bridge and Tilbury.