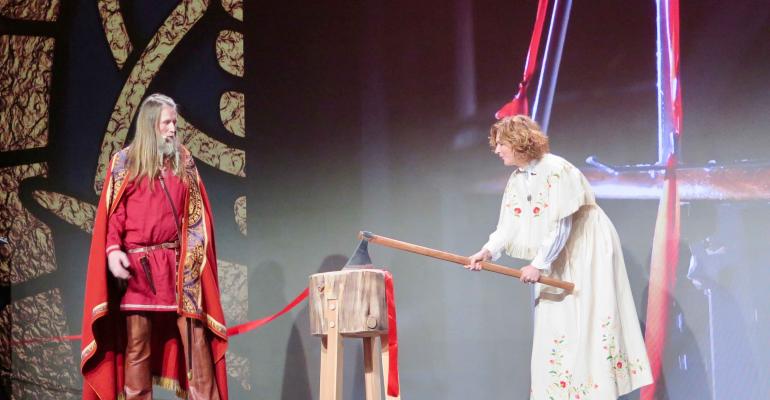 Kyrkjebø’s chop Wednesday night — on the same Beverly Hills stage that just days before hosted the star-studded Golden Globes Awards — signaled crew of Viking Jupiter, sailing thousands of miles away, to smash a bottle of aquavit on the ship’s hull.

On stage with the godmother was Capt. Atle Knutsen. He spoke by satellite link with Capt. Erik Saahq aboard Jupiter, en route from the Falkland Islands to Cape Horn.

‘Viking Jupiter’s location tonight, near Ushuaia, Argentitina, is particularly significant,’ Viking EVP Karine Hagen said. ‘Ushuaia is the southernmost port our ocean ships currently visit, but with today’s announcement of Viking Expeditions, it will also serve as the launch port for our guests to explore the Antarctic region in Viking comfort.’

The crimson-caped Viking Geir Magne Røvik presented the axe, a replica of one unearthed in the Oslofjord, to Kyrkjebø. He explained such axes were a symbol of power and success in the Viking age.

The world-famous singer has been a part of Viking ocean ship launches since the start, first performing at Viking Star’s lavish naming in Bergen, her hometown.

Putting Norway on the global stage

Kyrkjebø said no one has done more than Hagen to place Norway and Norwegian culture on the international map — except perhaps, for the Vikings.

The 930-passenger, 47,800gt Viking Jupiter was delivered by Fincantieri’s Ancona yard in February last year, but plans for a June naming in Oslo were postponed following sister Viking Sky’s power loss and evacuation off the Norwegian coast in March.